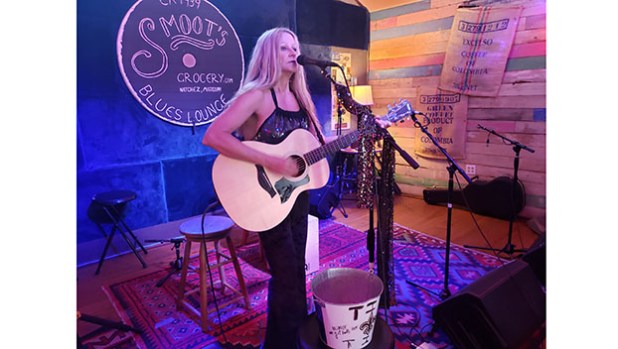 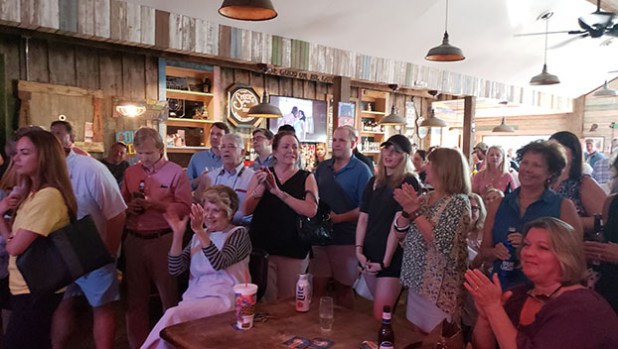 Smoot's Grocery was filled with balloon race fans who wanted to hear the music lineup for this year’s festival. (Sabrina Robertson / The Natchez Democrat)

NATCHEZ — At an announcement party Thursday evening, Natchez Balloon Festival organizers said Bishop Gunn would be the headlining band for the festival slated for the third weekend in October.

Other musical acts scheduled to perform at the three-day event starting Oct. 18 through Oct. 20 include Allman Betts, John “Papa” Gros, on Friday; Cowboy Mouth, Mr. Sipp, The B3, Maggie Brown and Bishop Gunn on Saturday; and Chris Gill & The Sole Shakers on Sunday.

These changes would include simplifying the name from “Great Mississippi River Balloon Race” to “Natchez Balloon Festival,” branding it with a new logo and recruiting a new music organizer for the festival.

The bands unveiled during Thursday’s party at Smoot’s Grocery are a result of one of those changes, as the organizers brought in music promoter Arden Barnett of Ardenland to help bring in fresh entertainment at the festival.

Barnett produces eight festivals and more than 150 shows each year throughout the nation, including the Bishop Gunn Crawfish Boil in Natchez.

A couple of other surprises were slipped into Thursday’s announcement party as well.

As many people were delighted to hear that Bishop Gunn would be making a reappearance, members of the band sent a video message to Barnett expressing how they were just as delighted to be coming home to Natchez — where most of the band’s members grew up.

“We’re super excited to be coming home for this,” said drummer, Burne Sharp.

Maggie Brown also offered locals a glimpse of her talent during her special appearance at Thursday’s announcement party.

“At age 12, this young lady (Brown) locked herself in a room and came out a week later playing a guitar,” Barnett said. “That’s the way it’s done for those aspiring to be in the music business.”

Of course, the music is not the only thing that excites during the balloon festival.

A single hot air balloon was tethered just outside Smoot’s in Bluff Park, foreshadowing the festivities still to come in October.