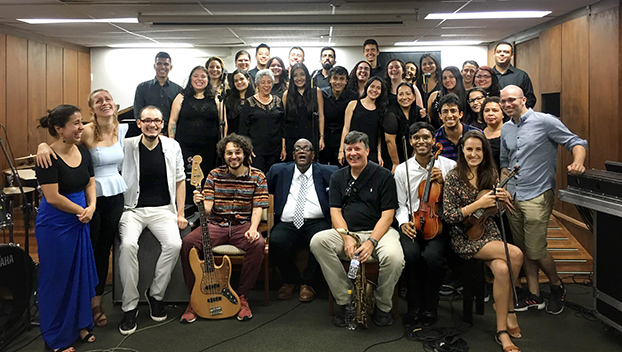 Natchez musician Alvin Shelby, bottom row center, traveled to Columbia, South America, to share his love of gospel music and to teach gospel to a local choir. Shelby said despite the language barrier, the music bridged North America to South America during his week-long trip. (submitted)

For one Natchez musician, a trip to South America to share his musical heritage turned into a transformative experience.

Alvin Shelby has played in many corners of the world — from Europe to Africa and areas in between — but the musician had never been to South America.

Shelby said he was thrilled when a chance visit to one of his Natchez concerts led to an invitation to play at the Ocobo Music Festival in Ibagué, Columbia.

Originally, Shelby had been asked to play as an accompanist, but when his colleague could not make the trip, festival organizers made another request. They not only asked Shelby to share his musical talents, but they also asked him to come to Columbia to teach a gospel music workshop with a local choir and then entertain audiences with a two-hour concert.

Just returning from his trip on Sunday, Shelby said the week-long adventure was something he will never forget.

“It was a life-changing experience,” he said.

Shelby said his original goal was to share the gift of gospel music and Mississippi’s rich musical heritage.

With two translators and sheet music written in English, Shelby taught more than 30 Spanish-speaking choir members the essence of traditional gospel music, a type of music few of the choir members had ever heard.

During the trip, Shelby said he also collaborated with musicians and performed pop-up concerts and attended workshops. He hopes to take many of the things he learned and introduce them to his music students at Cathedral School.

After several days of rehearsals, Shelby said the choir went from learning the technical aspects of gospel to discovering the real joy of the music.

Shelby’s trip ended with a Friday night concert to a standing-room-only audience.

“There is something magic about gospel music,” Shelby said. “The music transformed them that night. They actually sounded like a gospel choir that I play for on Sunday mornings in Natchez.”

For two hours, Shelby and the choir kept the audience cheering and clapping.

“It was unbelievable. Somehow the music just brings people together despite the language barrier.”

Shelby said after the concert, people came to him overjoyed with emotion.

“One of the ladies said to me after it was over, ‘Thank you for showing me a new way to love God,’” Shelby said. “Another group that found me after the concert said, ‘You have left your footprints on our hearts.’”

Shelby said, hearing the response from the crowd left him in awe of the experience, one where the music was the bridge between North America and South America.

“It was a transformative experience for them and for me,” Shelby said. “I thought it was awesome because I felt like I had accomplished what I set out to accomplish and more.”

VIDALIA — Vidalia is gearing up to tackle approximately $5.4 million needed in repairs after the record-long Mississippi River... read more