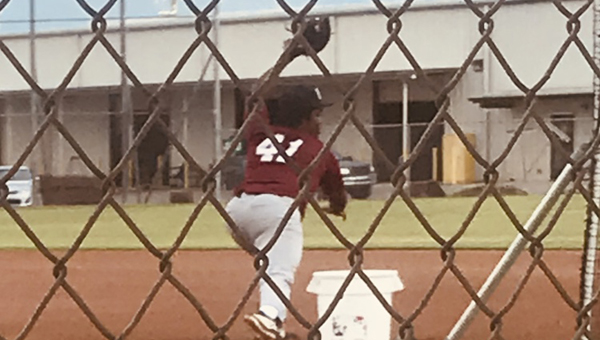 C.J. Chatman of Vidalia displays his baseball fundamentals while catching a baseball on the baseball field in Fort Meyers, Florida, recently. Chatman was invited to participate in the Perfect Games Prospect Showcase where he played third base on the Maroon team. (Submitted Photo)

VIDALIA — Christopher “C.J.” Chatman, a 5-11, 235-pound first baseman and senior-to-be at Vidalia High School, has had a banner year in 2019 and that continued last weekend as he made the roster for and was the starting first baseman for the Maroon team at the Perfect Games Prospect Showcase in Fort Myers, Fla.

As a junior on the Vikings’ baseball team, Chatman finished with a .449 batting average with 20 runs batted in, made the LHSAA District 2-2A All-District First Team, and was named The Natchez Democrat’s All-Metro Baseball Player of the Year.

“He had 14 out of 15 fundamentals and was very aggressive in his batting. They called and C.J. answered,” his mother Tabanika ‘Tabby’ Chatman said. “We would like to thank Perfect Games for the invite, (Vidalia head baseball) coach Michael Norris and his coaching staff, and also Ronnie ‘Stine’ Wilkerson and Lawrance Garrison for helping C.J. prepare (him) for this great event. Last, but not least, Bobby Hill.”

Hill is a former high school baseball coach at North Natchez High School and Ferriday High School, a former scout for the Pittsburgh Pirates, and is now a baseball consultant in the state of Florida. He works alongside Kevin Maris, the son of home run great Roger Maris.

“Hill was by our side the whole weekend during this extraordinary event,” Tabanika said. “We are grateful that C.J. was able to represent Concordia Parish. We are praying for a very productive and successful year for C.J. Nobody is safe on first.”

WINNSBORO, Louisiana — Anna Poole and Lauren Dunbar combined for six base hits, with four of them going for extra... read more