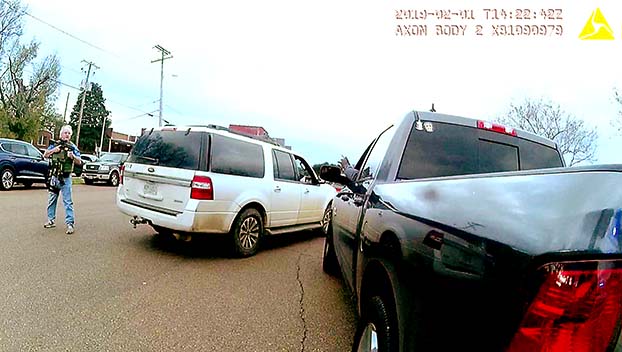 This photograph from a deputy’s body cam that is included in a federal lawsuit filed against Stephen Guido and Adams County Sheriff Travis Patten shows Guido allegedly pointing an assault rifle at the plaintiff Triand “Tron” McCoy.(submitted)

NATCHEZ — On the morning of Feb. 1, Triand “Tron” McCoy dropped his son off at school in Natchez, drove to the bluff and parked his truck in a public parking spot on Broadway Street overlooking the Mississippi River.

That was his custom, states a lawsuit McCoy filed in federal court July 23 against Stephen Guido and Adams County Sheriff Travis Patten, individually and in his official capacity, along with Mississippi Drilling Inc. and “John Does.”

“Mr. McCoy is a single father and the sole caregiver for his disabled mother,” the lawsuit states, “and Mr. McCoy used these brief moments alone each morning to relax, reflect and gather his thoughts for a moment before starting his work day as the investigator for the District Attorney for the 7th Judicial District Court of Louisiana.”

As McCoy sat in his truck that Feb. 1 morning, Adams County Sheriff’s Office Reserve Deputy Stephen Guido, driving an SUV owned by Mississippi Drilling Inc. of which Guido is the president, parked his vehicle diagonally in front of McCoy’s vehicle prohibiting McCoy from driving forward, the lawsuit states.

“Guido had instructed another deputy to pull behind Mr. McCoy so that he would be trapped,” the lawsuit states. “Guido, dressed in body armor with “SHERIFF” emblazoned across the chest and armed with a Bushmaster AR15-style assault rifle, a .45 caliber handgun and an X26 model TASER, then jumped out of the SUV and aimed the assault rifle at Mr. McCoy, as seen in the screenshot from Adams County Sheriff’s Deputy Ricco Carter’s body camera footage of the assault.”

The lawsuit, filed in the United States District Court for the Southern District of Mississippi Western Division, further states that Guido cursed at McCoy, “threatening that he would shoot Mr. McCoy if he moved and demanding that Mr. McCoy identify himself.”

Other deputies arrived on the scene and Guido eventually lowered his assault rifle before taking up his Taser.

“While holding his TASER at the ready, Guido continued to yell and curse at Mr. McCoy, demanding to know what he was doing parked in a public space on North Broadway,” the lawsuit states. “Guido is a white male, while Mr. McCoy is African-American.”

The lawsuit states the “assaultive action was without any reasonable justification and was not in keeping with any use of force protocol adopted by the Adams County Sheriff’s Department or any other law enforcement agency in the United States.”

Guido said, according to the lawsuit, that he was on duty as a reserved deputy that morning and that he was acting on the direction of Patten, a claim Patten denies.

Patten said Guido’s actions were unjustified on that morning and that he stripped Guido of any reserve deputy duties as soon as he learned about it.

“It doesn’t matter who it is,” Patten said, “if it is against our policies and our rules and our procedures, discipline is going to be issued and once I was made aware of what happened with him down there that day, he was stripped immediately of everything indefinitely.”

Patten said that while he has stripped Guido of his reserve deputy status, he has retained Guido as the sheriff’s office’s helicopter pilot.

Guido has served as a reserve deputy for some 17 years and also is the pilot for the sheriff’s office’s helicopter, Patten said.

The lawsuit states that Guido donated the helicopter to the sheriff’s office and that Guido also operates drones for the department.

“What he (Guido) still has to do for us is we have a helicopter here, and I have to have maintenance on this thing every month,” Patten said. “So the only thing he still does for us as of right now is the helicopter and that is it.”

“It would cost me an arm and a leg to pay a guy to do what he does for us for free,” Patten said. “… He hasn’t done anything law enforcement wise (since the Feb. 1 incident). We are waiting on the rest of this to come up to finish on out to protect both sides, but I made it pretty clear I wasn’t happy with it (the incident), and I voiced my opinion of it with the victim and I apologized to him for what had happened and I took action as a supervisor as well. On the same token I expressed those same things with Stephen as well. He has really dedicated himself to serving his sheriff’s office but in this case the actions…  it just wasn’t called for on the circumstances that were set up.”

McCoy, who is also an alderman for the Town of Vidalia, originally filed the lawsuit in Mississippi state court in April and Patten was not a named defendant in that case.

After Guido filed statements in discovery for that case, new information came to light, that prompted McCoy’s attorney Matthew Eichelberger of Jackson to file the case in federal court as well and to name Patten and other defendants in the case.

Eichelberger said once he received Guido’s written discovery responses in June to the original lawsuit filed in April, he had no choice but to bring Patten into the case since Guido said he was acting under the direction of Patten.

“I tried not to sue him (Patten) the first time, but his keeping Guido on the force and Guido saying the sheriff told him to do it, I can’t do anything otherwise than to sue the sheriff,” Eichelberger said. “If he is instructing the guy to go pull the gun then I’ve got to do that. Otherwise what happens is we go to try the case in state court and Guido says, ‘Well the sheriff told me to do it,’ and I don’t have the sheriff there to defend it in case the jury believes it.”

Eichelberger said he plans to file a stay on the state lawsuit and keep the case in federal court, which is where such civil rights cases must be heard.

“I can’t sue the sheriff in state court, not for civil rights violations, which is what the sheriff would have done by directing it to happen,” Eichelberger said. “So I guess technically I could have but they would just remove it to federal court. There was not much of a way for me to go forward in state court with those charges.”

Eichelberger also said he has evidence of Guido wearing a sheriff’s vest in public and hanging around with other deputies after Patten said he had relieved Guido of his reserve officer’s duties.

All of which is a pattern, Eichelberger said of Guido, and the lawsuit makes reference to an April 10, 2016, Vidalia police report that alleges Guido pulled a gun on a motorist in Natchez and the motorist fled to his home in Vidalia as Guido chased him.

“I do (think it is a pattern) and the sheriff is aware of it,” Eichelberger said, “and the sheriff can say that Guido is not a reserve deputy anymore, but we’ve got pictures of him cruising around on June 24 four months after this incident wearing sheriff’s department gear, riding around with other sheriff’s deputies.”

The federal case being filed July 23 just days before the Aug. 6 primary elections was just a coincidence, Eichelberger said, adding that June and July are busy times for him with bar conferences and that Guido filing his discovery responses in June attributed to the timing of the federal filing.

“I don’t see how this lawsuit would have affected Travis Patten,” Eichelberger said. “I mean he is an extremely popular sheriff down there.”

Guido and McCoy declined to comment for this story. Patten and Guido said they had not yet been served with the federal lawsuit when they were contacted for interviews for this story. Eichelberger said the suit was sent for service last week.

McCoy’s lawsuit states that the Feb. 1 incident caused post-traumatic stress and has caused him to miss work, loss of sleep and appetite and a racing heart that is unresponsive to medication.

McCoy seeks a trial and relief in damages, including permanent emotion injury, pain and suffering, economic damages, loss of enjoyment of life, past present and future emotional distress and mental anguish and medical expenses, court costs, pre and post judgment interest, attorney’s fees, out-of-pocket expenses and all other damages.

Patten said he believes he responded appropriately to the incident and maintains that he has stripped Guido of his reserve deputy position.

“We are waiting on the rest of this to come up to finish on out to protect both sides,” Patten said, “but I made it pretty clear I wasn’t happy with it and I voiced my opinion of it with the victim and I apologized to him for what had happened and I took action as a supervisor as well.”

Eichelberger said he is not only looking after his client’s rights but also standing up for proper law enforcement.

“We can’t stand for stuff like this,” Eichelberger said. “It is not OK. It is not ever OK for an officer to act that way. Citizens don’t need to be afraid of their law enforcement officers.”