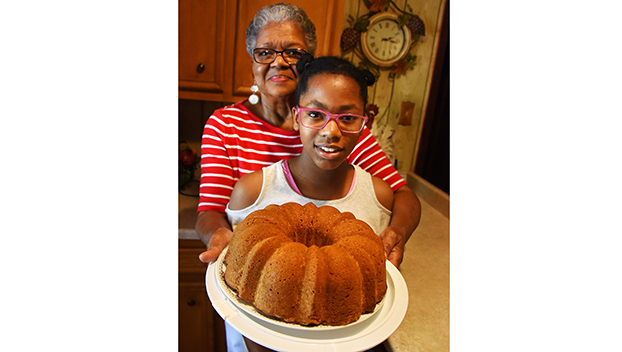 Inspired by her grandmother Mable Calvit, Kenadie Calvit makes delicious pound cakes and sells them to family, friends and members of her church. Kenadie bakes the cakes from scratch using the recipes she learned from her grandmother. (Ben Hillyer / The Natchez Democrat)

One local entrepreneur hopes to follow in the footsteps of some of the world’s most successful business people.

Natchez’s Kenadie Calvit started her baking business with an Easy Bake oven and the loving encouragement of her grandmother Mable Calvit.

These days, the 10-year-old is using a real oven and real ingredients to make her 7-Up cakes and Philadephia Cream Cheese pound cakes. When she is not attending Adams County Christian School, Kenadie is selling her cakes to friends, family and members of her church, Zion Chapel AME.

“My mom bought her an Easy Bake Oven and that is what started it off,” Kenadie’s mom Kendra Calvit said.

But it wasn’t until the third grade at the side of her grandmother that Kenadie’s passion for baking blossomed.

“She came to spend the day with me one day. I had a list of things to do and baking was one of them,” Mable said. “I started the mixer, and she ran up to see what was going on.”

Mable said she asked Kenadie if she would like to bake a cake.

“She said, ‘Yes’ and I said, ‘Just watch me do this one and the next one I will let you bake.’” Mable said.

Like her granddaughter, Mable said she started baking when she was very young.

“My mother taught me how to bake when I was like 12 years old,” Mable said.

These days, Kenadie follows the same recipes taught to her by her grandmother.

Kenadie uses nothing but the freshest ingredients — eggs, sugar, butter, vanilla and flour.

And she uses the same mixer and baking pans her grandmother uses.

“I lay all of the ingredients out, so I have them in front of me,” Kenadie said.

She starts with six eggs, then pours in the sugar and then adds the butter.

“Then I cream it,” Kenadie said.

Once the mixture is light and fluffy, Kenadie slowly adds the flour and then one cup of 7-Up.

Then she mixes the batter until it is smooth and creamy.

“I told her when it begins to look like ice cream — when it is real pretty and smooth — then your batter is ready,” Mable said.

Since that first cake, Kenadie has baked nearly 15 cakes, mostly during the holidays or for special occasions.

The small baking business is just one of many creative ventures Kenadie said she is pursuing. She also enjoys painting and making jewelry. For her mother’s sorority, Kenadie recently sold 12 pink and green bracelets she fashioned from beads and string.

Like her other creative pursuits, Kenadie said she is also beginning to experiment with new baking ideas, including making sugar cookies and other delectable delights. One Thanksgiving, she made turkey cookies using candy corn as decoration.

After two years of baking, Kenadie has created a fan base that is beginning to rival her grandmother’s, Mable said.

“I got a call the other day from a church member who said she wanted to know if Kenadie could make her a cake,” Mable said. “She didn’t say she wanted me to bake a cake. She said she wanted Kenadie.”

Kenadie is too humble to say whether she thinks her cakes are better than her grandmother’s. But she believes they are close.

“They are probably the same,” Kenadie said with a smile.

NATCHEZ — A low-carbon fuel supplier announced Friday that three of its facilities would be shut down temporarily, including... read more