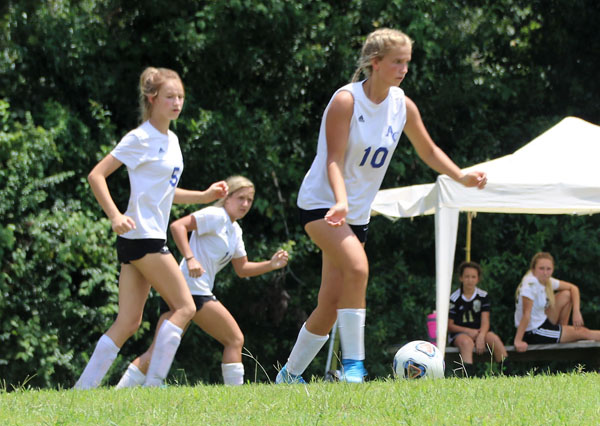 Adams County Christian Schoo’s No.10, Drue Boyd, prepares for a kick during the ACCS vs Oak Forest game at ACCS Saturday afternoon. She completed four goals throughout the day in three games. (Courtesy Kent Knee)

NATCHEZ — It was a banner day Saturday for Cathedral’s varsity and junior varsity girls’ soccer teams while Adams County Christian School’s JV and varsity teams had a solid performance at the ACCS Tournament.

“The tournament was a huge success,” Lady Rebels head coach Jimmy Allgood said. “It was a very hot day for soccer, but there was a good turnout of support for each school involved. We played from 9 a.m. to 6 p.m. All teams saw plenty of action.”

The Lady Green Wave’s JV team went 2-0 and the varsity team ended up going 3-0, capped off with a 3-0 win over the host Lady Rebels for the championship. Izzy Dupre capped off a six-goal performance in tournament play with two goals and Hailey Ellis had one goal with Gracie Foster accounting for two assists.

Allgood noted that trophies went out to the varsity teams that came in first, second, and third places.

“My keeper, Rivers Lee, did a really good job,” Cathedral head coach Dennis Hogue said. “She had a short-term goal of not giving up any goals. Two minutes and twenty-three seconds into the first game (against Oak Forest Academy) she gave up two goals and she said, ‘so much for my short-term goals.’ I told her not to give up any more goals.”

In fact, Lees only allowed one goal the rest of the tournament. But Hogue wasn’t too happy about how the varsity Lady Green Wave started out after trailing the Lady Yellow Jackets 2-0 just 2:23 into that match.

“I was thinking, ‘Are they still asleep? Are they interested?’ And I said, ‘Hey, let’s wake up. Let’s play some defense.’,” Hogue said. “It was a good eye-opener. (They were) communicating better, passing better. They turned it on.”

Cathedral scored seven unanswered goals to take care of Oak Forest Academy in its opening match, 7-2. Olivia Moore led the offense with four goals while Dupre had two goals and Ellis had one goal.

“Who didn’t score for us?”, Hogue jokingly said. And that not only was said about that match, but all three matches involving the varsity squad.

Later on in the day, the Lady Green Wave defeated the Parklane Academy Lady Pioneers 4-1. Dupre scored two goals while Moore and Maddie Verucchi each had one goal. Ellis and Foster each had one assist.

“It was crazy hot. We played so amazing. We only have 15 players on the varsity team, so conditioning is important. We had a few waters breaks,” Hogue said. “But I also told them that they are having to deal with the heat, too.”

Overall, Hogue said he was “super proud, super pleased” with his team’s performance.

Cathedral’s JV team shut out Parklane’s JV squad 1-0 and defeated ACCS’s JV Lady Rebels 3-2 despite an own goal on a deflection by the goalie. That put the JV Lady Green Wave’ overall record at 2-1-1.

While Cathedral’s varsity team won a trophy for first place with its shutout win over ACCS, the Lady Rebels ended up having to settle for a third-place trophy while Oak Forest took second place with a tie-breaking win for the host team.

The Lady Rebels started off strong with a convincing 3-0 win over Parklane Academy. Drue Boyd scored two goals and MaKenzie Campbell scored one goal. In its next game, ACCS and Oak Forest played to a 1-1 tie at the end of regulation. Boyd scored the Lady Rebels’ only goal in that match.

“They edged us out in a penalty kick shootout for second place,” Allgood said.

The JV Lady Rebels took care of Parklane Academy’s JV Lady Pioneers 4-0 behind a four-goal performance from Breanna Owens before coming up short against Cathedral. Boyd had her fourth goal of the day in the match against Cathedral.

The varsity Lady Rebels (4-6) were supposed to have a match Monday afternoon against Hattiesburg at Brookhaven Academy, but Allgood said no field was available. Their next match will not be until Monday, Aug. 26 when they play host to Parklane Academy.

NATCHEZ — The Natchez High School Bulldogs had their moments on offense, but it was their defense that stood... read more