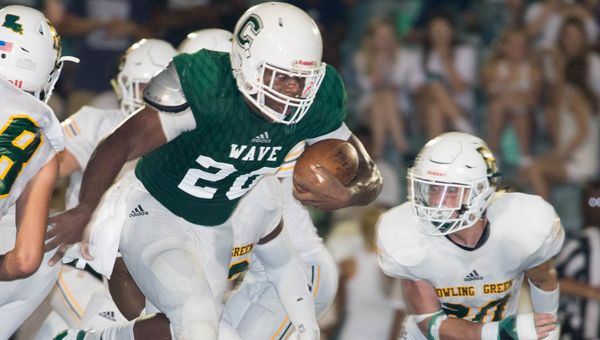 “We turned the ball over too much. Missed too many blocks,” Cathedral head coach Chuck Darbonne said. “We weren’t able to put it all together. We put some players in different positions they’re not used to.”

After a scoreless first quarter, the Buccaneers scored at the 4:28 mark of the second quarter and went into halftime with a 6-0 lead. They scored again with 2:54 to go in the third quarter for a 12-0 advantage and then put the game on ice with a late touchdown and two-point conversion in the fourth quarter. “We played hard to the end. I’m happy with the way they played,” Darbonne said.

Taylor threw 35 passes, but only completed 12 of them for 92 yards. Ben White had seven receptions for 48 yards and JC Harris was the Green Wave’s leading rusher with four carries for 26 yards.

Landon Lees and KJ Washington, who had four carries for 25 yards, led the defense with six tackles each.

Cathedral (0-1) hits the road next Friday when it plays at St. Joseph Madison. Kickoff is set for 7 p.m.

NATCHEZ — The Adams County Christian School Rebels are looking for a tough season-opener Friday night when they host the... read more