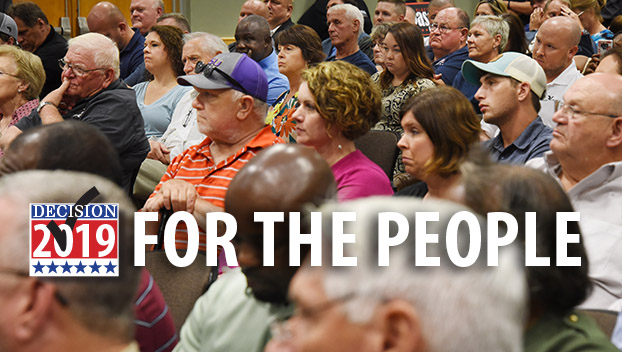 Concordia Parish voters filled the Vidalia Conference and Convention Center hall Thursday evening to hear from candidates during a forum sponsored by the Concordia Chamber of Commerce. (Ben Hillyer / The Natchez Democrat)

VIDALIA — Approximately 250 people gathered at the Vidalia Conference and Convention Center Thursday evening to hear from candidates whose names will appear on the ballot during the Louisiana primary election Oct. 12.

“This evening, we’re gathered to hear from many of the candidates in our local police jury, clerk of court and sheriff’s races,” Hughes said. “One of the great things about our country is that we’re given the choice to select our leaders. …

“I also want to thank each of the citizens here for coming tonight. Without citizens involved, I don’t believe there would be progress in our community. Seeing this many people here and this many people running in this election means people are concerned, and they want to be involved to see our community become better and to prosper.”

Candidates up for one of the nine district seats on the police jury in attendance were given four minutes each to present their campaign platforms.

The remainder of Thursday night’s participants — including three candidates for sheriff and three for clerk of court — spoke in a question-answer format after a two-minute opening statement and were asked the same questions concerning their prospective offices.

Many of Thursday’s attendees came with their selected candidates in mind while wearing T-shirts and passing out campaign brochures.

Others said they came simply to stay informed before the upcoming election.

“I was interested in coming here because I didn’t know what these candidates stood for,” said Lisa Cater, a Vidalia resident. “I came here to find out.”

Emerson Slain, who lives in District 4-A in Concordia Parish, said he simply wanted to know the person he would be voting for in October rather than just seeing their name on a flyer or sign.

“I want to be an educated voter,” Slain said. “I want to know who I am voting for and why. That is what I’m here — to learn.”

NATCHEZ — A Natchez country rap artist is getting his big break this September as the opening act for... read more