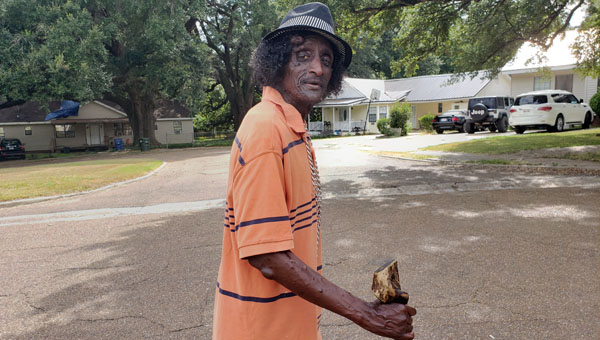 David Latham walks outside of his house on Roselawn Drive in Natchez on Friday afternoon. (Sabrina Simms, The Natchez Democrat)

NATCHEZ — Almost every morning, 61-year-old David Latham said he wakes up before the sun, sometimes 4 or 5 a.m., fixes his coffee and starts walking.

When The Dart landed near Latham’s house on Roselawn drive Friday afternoon, he was out doing that very thing he often does — walking.

“I walk just about everywhere,” he said, “at least 3 miles every day.”

It was 90-degrees outside Friday afternoon and threatening thunderclouds darkened the sky.

However, Latham said that never stopped him from walking before.

“I walk whether it’s hot or cold out,” he said, “but I don’t mind the heat as much as the cold. They say if you’re born in the winter you can stand colder weather, but I was born in January. … It’s just not true.”

Latham said he has always enjoyed walking to clear his head and lately keeps it up for his health.

“I’ve got a bad heart — real bad heart,” he said. “I walk every day to keep myself from going down. … My doctor said whatever you’re doing, keep doing it.”

As he walks, Latham said he runs across people from everywhere.

A lot of them stop to compliment Latham’s cane — a short polished stick of wood with a twisted handle — which Latham said is “just a cane.”

Latham said he has lived in Natchez all his life, but the city itself has not changed much from what he has seen, he said — not as much compared to the people he has met over the years while walking along the Natchez streets.

“The people here have changed,” he said. “… People come and people go.”