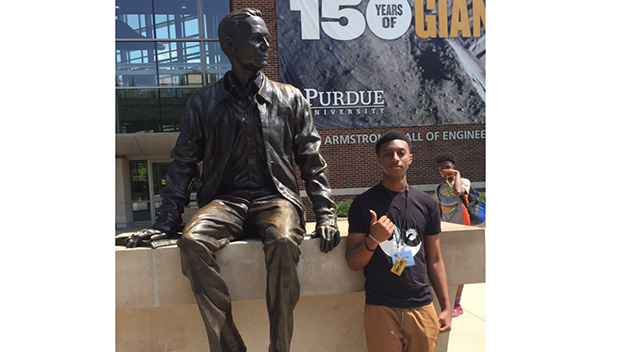 Derrick Carson, 10th-grade student at Concordia Parish Academy, stands next to a Neil Armstrong statue at Purdue University in Indiana where he attended summer camp in July. He is the son of Derrick and Godfrey Carson. (submitted)

VIDALIA — Concordia Parish Academy 10th-grader Derrick Carson said this past summer was an enlightening one after he spent a week away in July at an engineering summer camp at Purdue University in Indiana.

“It was a nice experience for me,” Carson said. “They helped me explore other universities I could go to besides closer ones like Grambling or Alcorn. It also gave me more experience in engineering fields and allowed me to meet new people.”

Carson said he studied and experimented with two different types of engineering he previously knew little about — biomedical and agricultural engineering.

“In one experiment, we had to build a prosthetic leg out of different materials you might find lying around the house,” Carson said. “… It had to be flexible and stable enough to hold up a human well enough for them to walk 10 feet while wearing it. It was difficult because I wound up being the one who had to walk with it and I’m pretty tall — about 6 foot 2 inches.”

In another experiment, Carson said he had to build a water filter out of a plastic bottle, coffee filters, sand and pebbles and use it to make brown water clear again.

It worked and became clear enough to drink, Carson said, adding he opted not to drink it himself.

When he graduates from high school, Carson said he hopes to study sports medicine, adding his top choices in schools are the University of Alabama at Birmingham or Southern University in Baton Rouge.

“I play sports myself,” Carson said, “and I’ve experienced some problems staying mobile enough to keep from getting hurt.

“… In sports medicine, they train you in ways to help the body perform better so I can help others who’ve had the same problems. … I’ve learned to stay flexible with yoga, a lot of stretching and strengthening my muscles and by not going as fast — taking everything little by little.”

Carson is a member of the basketball and tennis teams at CPA and also enjoys reading and hanging out with his friends, he said.

He is the son of Derrick and Godfrey Carson.