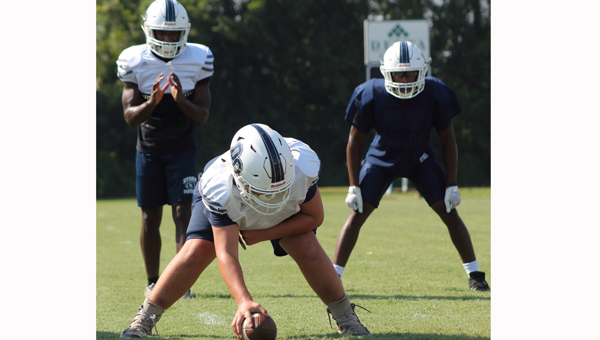 Chase McGraw hikes the football to Kavarius Whitehead during Wednesday’s practice. The Storm are preparing for their first game of the season against the Delhi Charter Gators. (Patrick Murphy | The Natchez Democrat)

From last season’s roster, the Storm have nine returning seniors for this season. Two of the seniors are Kavarius Whitehead and Cole Beard.

“We’ve got Kavarius and Cole, several other guys that have been through a lot of battles here,” Wheeler said. “They’re helping with the young guys, taking a leadership role in that. I’m just excited to watch them play. They really enjoy playing together as a team.”

In last weekend’s jamboree at Delhi Charter, the Storm faced Madison and Beekman. The Storm defeated Madison, 8-0, and Beekman, 12-6.

Wheeler said he wants his team to be more consistent in offense, defense and special teams.

“I saw some good things through the jamboree. We’ve got a lot of kids who play hard,” Wheeler said. “I want us to do that on a consistent basis, week in and out. Hopefully that will go with us through the season.”

The first time Delta Charter faced Delhi Charter Gators was in 2015. The Storm were defeated by the Gators, 48-0. This will be the first time since 2016 the teams will face each other. Wheeler said this game will be a good test for his team.

“I would love to see it become a rivalry, hopefully soon. I’m planning on keeping them on the schedule, if they keep us,” Wheeler said. “I would like it to be an every year thing. I think it would be exciting. The battle of the DCs.”

In practices this week, Beard said he has been focusing on his blocking to get him ready. Beard said he wants to obtain 160 tackles this season. Last season, Beard had 101 tackles. Another player to watch is Whitehead. In the jamboree, Whitehead was able to score two touchdowns, one rushing and one passing. As a leader on the team, Whitehead said he’s making sure everyone is in the right spot.

“I made sure they know the plays and everything, so we wouldn’t go out there and mess up,” Whitehead said. “Me being the leader, I have to make sure everyone is in the right spot.”

The Storm will travel to the Gators on Friday. The kickoff is set at 7 p.m.