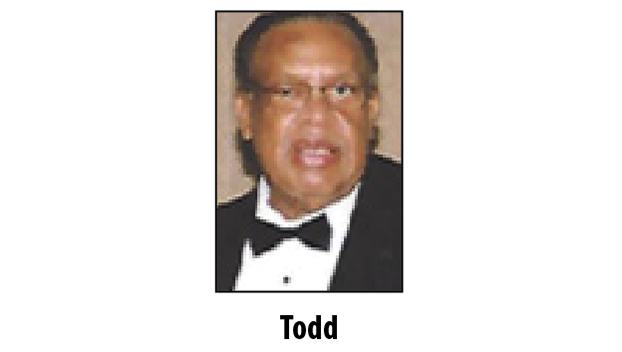 NATCHEZ — Friends remember J.R. Todd Jr., M.D., who died Saturday at the age of 77, as a well-rounded man who cared for his community and had a great sense of humor.

Todd was a lay historian, who studied and wrote about African Americans and slave history, and he worked to keep the memory of the Rhythm Nightclub fire alive, as he had loved ones who perished in the fire, Mitchell said.

The Rhythm Nightclub was a dance hall in Natchez that burned April 23, 1940, killing 209 people and injuring others.

Todd, a Natchez native, practiced medicine in the Mississippi Delta starting in Mound Bayou when he was only a sophomore medical student. He later became director of the outpatient department at Mound Bayou Community Hospital and went on to work at Meharry Medical College in Tennessee before going into private practice.

Todd brought his practice to Natchez in 1976.

Former Natchez Mayor Phillip West said Todd made invaluable contributions to the community, many of which people never knew about.

“He relocated his clinic here in the ’70s, and at the time we needed that kind of health care clinic,” West said. “We did not have the kind of clinics we have now. He filled that void for the underprivileged. I recall he would do physicals for kids in public schools without a fee, and he made that contribution year in and year out, he and his wife (the late Dr. Fredericka Cain Todd).”

Todd’s friend Everett Sanders said Todd cared more about serving his patients and the community than anything else.

Todd closed his practice in September 2015.

“Dr. Todd was responsible for attracting other talent, physicians, not only to Natchez but to southwest Mississippi,” Sanders said. “Filling his shoes will be impossible where the community has lost a giant.”

Todd had other talents and interests as well, Sanders said.

Todd also was a storyteller with a sense of humor.

“Dr. Todd was a man who loved comedy, funny things,” Mitchell said. “He always had a good joke. When we talked about things every so often he would bring in a good joke. There was a comical side to Dr. Todd.”

Todd also was a church-going Christian who had served on the board of directors at his church Zion Chapel in Natchez.

“He loved his church,” Mitchell said.

“Dr. Todd was an interesting person in a sense that he was a man of science as well as a man of God,” Sanders said. “He was very dedicated to his church and in keeping with that to his family. He loved his family his wife and children very dearly. That’s what good Christians do.”

The funeral will be 11 a.m. Saturday at the Natchez City Auditorium with the Rev. Mitchell officiating.