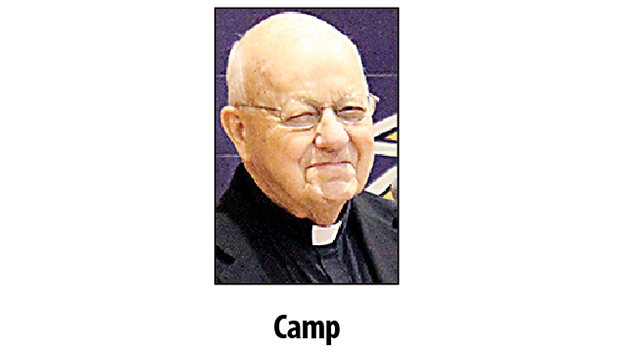 NATCHEZ — Friends and colleagues said the world lost a faithful servant and a gentle, sweet soul when the Rev. Alfred Camp died Sunday morning in Madison.

From 1992 to 2003, Camp shepherded the congregation at St. Mary Basilica through joy and heartache, friends said.

Camp guided the church with humor and compassion, Flowers said.

“He was just the most selfless human being,” Flowers said. “Sometimes, it was hard to see his humanness. In the 12 years that I spent under his leadership, he absorbed people’s joys and sorrows.”

“But they are very human,” Flowers said. “I think that is how priests like Father Camp are able to minister to us in our time of need.”

Cathedral teacher Stephanie Anderson worked with Camp in the Cathedral School Development Office when Camp was in Natchez.

Anderson said she will always remember Camp’s chuckle and his “sweet smile.”

“We prayed, we laughed, we walked away feeling so accomplished,” Anderson said of meetings with Camp. “Whether we were talking about finances or the maintenance of the school, we never lost sight of our mission, thanks to Father Camp.”

“He kept us grounded on what was important,” Anderson said.

During his time in Natchez, Camp led the church in celebration and crisis. In 1998, the church suffered significant damage from a tornado that ripped through downtown Natchez. With Camp’s guidance, the church embarked on major interior and exterior renovations of the church sanctuary.

Camp presided over the church’s celebration of its 150th anniversary in 1992 and celebrated with the parish when the church was designated as a minor basilica by the Vatican in 1998.

St. Mary parishioner Benny Jeansonne said he, like many others, valued his friendship with Camp.

Through the years, Jeansonne said his relationship with Camp centered on college football.

“We used to talk several times a week about football,” Jeansonne said.

Jeansonne said even though he was a die-hard LSU fan and Camp loved Ohio State, Jeansonne said he was also a Buckeyes fan as a result of their friendship.

Jeansonne said he still treasures the memories from when he took Camp to see Ohio State beat the Arkansas Razorbacks in the 2011 Sugar Bowl.

“He was just a great person. Everybody loved him,” Jeansonne said.

Flowers said Camp loved pranks, loved gifts and had several favorite sayings when he met people in church, at the school or in the community.

“When you asked him how he was doing, he would always respond with a smile, ‘About the same,’” Flowers said. “The first thing I thought about Sunday morning when I heard of his passing was, ‘You are not about the same anymore Father Camp.”

Flowers said she is so thankful for her time with Camp.

“No sadness, just gratitude that he was part of my life,” Flowers said. “I know that I am a better person because of him.”

A funeral mass will be celebrated for Camp at noon, Wednesday, Sept. 11 at St. Mary Basilica.