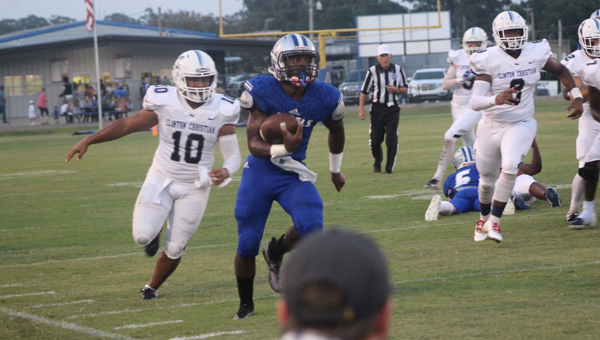 Adams County Christian School’s Corey Sewell begins his run for a touchdown during the first quarter against Clinton Christian Academy. Sewell would score and this was a 57-yard rushing touchdown. The Warriors would lead, 12-7. (Patrick Murphy, The Natchez Democrat)

NATCHEZ – It was a six-yard touchdown which sealed Adams County Christian School’s victory over Clinton Christian Academy. The final score was 41-26.

The Rebels keep their three-game winning streak intact. Earlier in the game, it looked like the Warriors would win the game. During the Warriors’ first drive of the game, it would obtain four first downs. On its third first down, Dylan Mitchell would throw to Noah Murray for a 39-yard pass.

“I thought he played with a lot of heart,” Bunio said. “Whatever happens adversity wise, he just kind of rolls with it, picks himself up and goes back at it. He doesn’t complain about his job.”

Two players that stood out in this game for the Rebels were Corey Sewell and Claven Dunbar. Forty-three seconds after CCA scored the first points in the first quarter, it was a 57-yard touchdown run by Sewell that gave the Rebels the lead. Sewell would add another rushing touchdown in the third quarter. Dunbar would score one rushing TD. Head coach David King said Sewell is going to give the team that effort every time.

“Sewell and Dunbar going to give you their effort every night,” King said. “They’re outstanding athletes. Two of the best I have coached.”

The Rebels would go into halftime with a three point lead, 21-18. It was a 32-yard touchdown pass by Mitchel with 39 seconds left, which made the score closer.

“We told them we had to score that first drive to get the momentum back. We have to get that two score lead,” King said to his players at halftime. “We have some good leaders on our ball club. They were a lot of that reason why we won.”

The Rebels (3-0) are on a 17-game winning streak going into next week’s game against Jackson Prep in Jackson. The Warriors (2-1) will face Canton Academy at home.