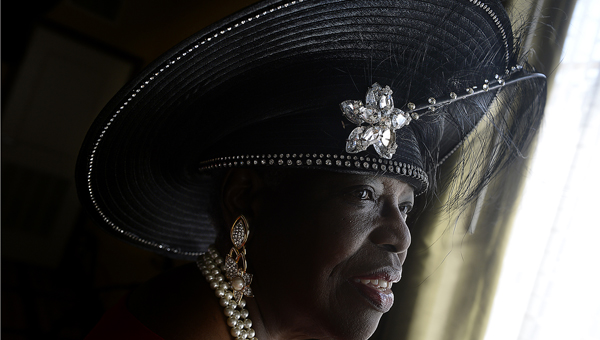 Joyce Washington Ivey wears a hat for a past Hats and Gloves Tea on the Mississippi River fundraising event she organizes annually for the past 10 years to raise money for Miss-Lou women to have mammograms and other health screenings to help prevent cancer. (File Photo, The Natchez Democrat)

NATCHEZ — Ten years ago, breast cancer survivor Joyce Washington Ivery turned vision into reality when she hosted the first “Hats and Gloves Tea” in her backyard.

Since then, Ivery and the Edna B. and Joyce Fay Washington Breast Cancer Foundation have raised enough money to provide more than 100 free mammograms to Miss-Lou women who do not have the ability to pay for such services.

The event and the mission has been Ivery’s passion since that first event in her backyard and Ivery said she hopes this year’s 10th year celebration will be the best yet.

The first year, approximately 30 people celebrated the inaugural tea in Ivery’s backyard. Since then, the tea has been hosted in the ballroom of the Natchez Grand Hotel on Canal Street in Natchez. Each year, the event has grown. More than 65 people attended last year’s tea, Ivery said.

“I hope we can exceed that this year for the 10th anniversary,” Ivery said.

The event will include an afternoon of entertainment, tea and light refreshments. Tickets are $35 and sold at the door.

All of the money raised from the event, Ivery said, will help locals with insufficient medical insurance receive free mammograms.

“No woman should ever not have a mammogram because she does not have the money,” Ivery said. “That is really important to me.”

Ivery said she is working with Merit Health Natchez to help provide the mammograms free of charge. The cost of the mammograms would come from the money raised at the tea and other fundraising.

“All the women have to do is go to the hospital,” Ivery said. “Whenever there is need for further study or exploration, we will pay for sonograms as well.”

Since the first tea, Ivery said the foundation has been able to provide more than 20 sonograms for women in the Miss-Lou.

“Unfortunately we are not able to go beyond that,” Ivery said.

Ivery said she has only been in contact with one of the women who has been helped in the Miss-Lou.

“When we initially started, there was one lady who sent us a card to say thank you,” Ivery said.

Despite not knowing the women who are being helped, Ivery said she knows she is making a difference.

As a breast cancer survivor, Ivery said she knows how important the diagnostic tool is for early detection of the disease.

“I am a 30-year survivor, and I had the vision for the foundation after my fifth year of survivorship,” Ivery said. “I wanted to do something to help others like me.”

This year, Ivery said the foundation celebrated 25 years of service to women in New Orleans and in the Miss-Lou.

“Fourteen of those years have included the Miss-Lou,” Ivery said.

Ivery regularly returns to New Orleans to be with the support group that she started 25 years ago. She also continues to raise money and awareness for breast cancer in the New Orleans area.

This year, the foundation in conjunction with New Orleans East Hospital, made a commitment to provide $5,000 to the Mastectomy Boutique, where women can go and be fitted for breast prostheses.

“All of these programs started with a vision, I don’t deserve the credit,” Ivery said.