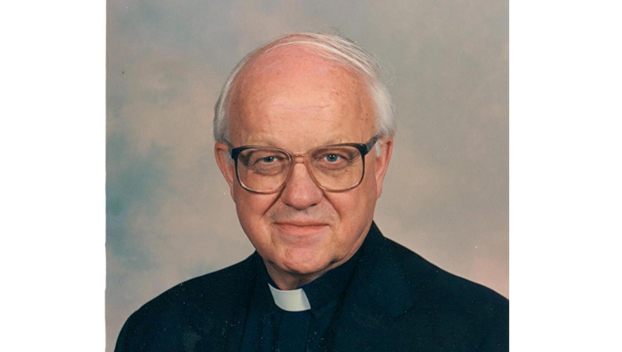 Rev. Alfred Louis “Al” Camp died Sunday, Sept. 1, at St. Dominic Hospital in Jackson. Born in Monroeville, Ohio, on Sept. 30, 1931, Fr. Camp enrolled in the Pontifical College Josephinum in Columbus, Ohio in 1945. After completing his seminary studies at the Josephinum in 1957, Fr. Camp was ordained to the priesthood on May 25, 1957 by Archbishop Amleto Giovanni Cicognani, Apostolic Delegate to the United States.

Fr. Camp taught Latin and served as Dean of Men in the College Division at the Josephinum from 1957 – 1966. While teaching, he also pursued undergraduate and graduate degrees from the Ohio State University in Classical Languages, Physical Education and Higher Education.

Upon completion of those studies, Fr. Camp came to the Diocese of Jackson (nee Natchez-Jackson) where he was assigned to St. Paul Parish in Vicksburg and St Aloysius School, where he began his life of service as a priest and educator. He served as teacher and principal of St. Aloysius until 1992, when he was named pastor of St. Mary Basilica in Natchez where he served until 2004. During his tenure in Natchez, St. Mary, the original Cathedral of the diocese, was named a minor basilica by Pope St. John Paul II.

Fr. Camp tried to retire in 2004, but his services were needed by the Bishop in Clarksdale as pastor of Immaculate Conception and St. Elizabeth Parishes. He served there for two years and then retired in 2006 as Senior Priest at St. Francis Parish in Madison.

Beloved by countless numbers of people with whom he shared his wisdom, knowledge, compassion and wonderful sense of humor, Fr. Camp never ceased to serve by visiting the sick and comforting the dying until his health no longer allowed it. He is survived by one sister and many nieces and nephews.

As the consummate educator he was, Fr. Camp chose to be an anatomical donor to the University of Mississippi Medical Center, so that even in death he will continue to teach. His pupils now are numerous medical students tasked with improving the healthcare of our state for all its inhabitants.

Bishop Joseph R. Kopacz will celebrate a Memorial Mass for Fr. Camp on Wednesday, Sept. 11, at noon at St. Mary Basilica in Natchez.