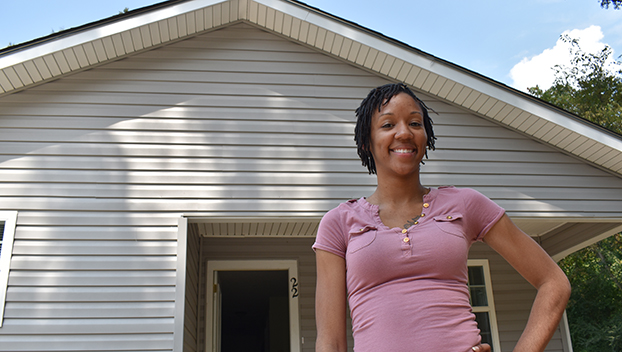 Latrice Carroll stands in front of her new Habitat for Humanity house that was dedicated during a ceremony Sunday after volunteers built the house from the ground up over the past year. (Scott Hawkins / The Natchez Democrat)

NATCHEZ — Members of the Natchez-Adams County Habitat for Humanity handed over keys of the organization’s 23rd house to the owner Latrice Carroll in a ceremony Sunday afternoon.

“I wake up and I’m like, ‘Am I really here?’” said Carroll, who has been living in the house for a few weeks since it was completed late last month. “It is surreal.”

Carroll, 31, is the daughter of Charlene Carroll Green, who was the recipient of a Habitat for Humanity House in 2003.

Carroll said the hardest part for her during the yearlong process was the waiting, but she said she was happy with the results of the house that was a ground-up build.

Duncan McFarlane, secretary to the board of the Natchez-Adams County Habitat for Humanity, said completing this house was special for a couple of reasons, one being that the first Habitat house he was involved with was for Carroll’s mother Green.

“I’m very much relieved to have it complete, primarily because of the heat,” McFarlane said, adding some 100 volunteers participated on building Carroll’s house over the past year but the past several months were particularly difficult because of a record heat wave.

Once construction is complete Habitat sells the house to the owner at cost and finances it at a 0 interest rate, McFarlane said.

During Sunday’s ceremony some 20 people, including family, friends, volunteers and Natchez-Adams County board members, including President Andrew Calvit, were on hand.

The Rev. Joan Gandy presented a Bible to Carroll and McFarlane and Calvit handed over the keys to Carroll who made an appreciation speech thanking the volunteers and board members and all who made it possible.

“I really appreciate everything,” Carroll said. “I am blessed. I thank everyone for making it possible.”