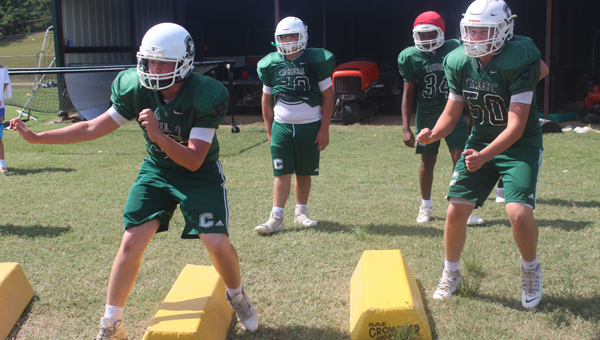 NATCHEZ — The Cathedral High Green Wave will host another Class 4A District 4 opponent in River Oaks School Mustangs from Louisiana at D’Evereux Stadium on Friday.

To prepare for the team’s second District 4 game of the season, head coach Chuck Darbonne said his team is trying to execute their basic plan.

At practices this week to prepare for the Mustangs, senior center Jack Russ said he has been focusing on doing whatever Darbonne has told him. As a senior, Russ said he wants to be a leader for the team.

“We as seniors basically need to push the underclassmen to start helping us to get better during practices,” Russ said. “Us seniors have to step up and be leaders of the team.”

In last week’s game against Hillcrest Christian School Cougars, the defense was key in the 34-0 win. They forced five turnovers and held the Cougars to minus nine-yards of total offense. Defensive middle linebacker Landon Lees helped force those fumbles in the game.

“I think it was more of a team effort than just solely me,” Lees said. “But we were all in the right place at the right time.”

The other defensive players who helped forced fumbles were Kaden Batieste and Bryson Moore. The River Oaks Mustangs come into this game on a 47-0 loss to Riverfield Academy in their first district game. Friday’s game will be the second district game for both teams.

After this second district game, the Green Wave (2-1, 1-0 District 4) will have two more District 4 games. Both of the games are on the road. Lees said this game against the Mustangs will be a pretty good game.

“You have to win your district games to have a chance at playoffs,” Lees said. “More people show up to watch these games and these games are more important.”

Before the game, the Green Wave will honor the 1969 Magnolia Conference championship team. Darbonne said he’s glad to have guys come back from those teams.

“It gives our guys something to look up to, even though it was a long time ago,” Darbonne said. “The guys who come back for this it shows how much pride they have in the school. We’re trying to instill that in the guys that are playing right now and the younger guys who are playing in junior high.”

The kickoff is set for 7 p.m at D’Evereux Stadium.