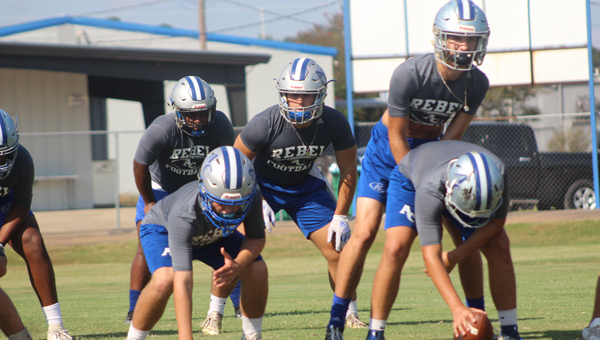 “It’s a supreme program and we’re honored to play them,” King said. “We got nothing to lose and I know this: my boys will never be intimidated by anybody. That’s what I know. This coaching staff and the team we have, we’re gonna play anybody.”

At practices this week, King has said he has mainly focused on offense and special teams. King said the Rebels’ special teams are better this year than they were last year.

In last week’s game against Clinton Christian Academy, Yohan Thompson, the kicker, was five for six on PATs. Thompson said his PATs were pretty solid.

“I made five out of six and for me, that’s pretty good,” Thompson said. “My form could be better, but I’m gonna start working on that. I need to get my technique better as well.”

Another player to watch is middle linebacker and running back Rhett McDonald. McDonald scored two touchdowns and ran for 15 yards. At practices this week, McDonald said he has been working on both offense and defense.

“I have really been watching film and recognizing their offensive formations,” McDonald said. “I’m getting the defense ready to recognize everything. I have been working on getting handoffs better, reading my blocks and getting more yards.”

Going into this game, King said he doesn’t want his team to be intimidated by Jackson Prep. In the past two games, the Patriots have outscored their opponents by 75-19.

“Jackson Prep wins most of their games before they ever start the game, because other teams are intimidated,” King said. “They may beat us 50-0. But there wouldn’t be anybody on our bus intimidated to play anybody.”

The game will begin at 7 p.m. at Jackson Preparatory School.

that ALL BEGIN AT 7: