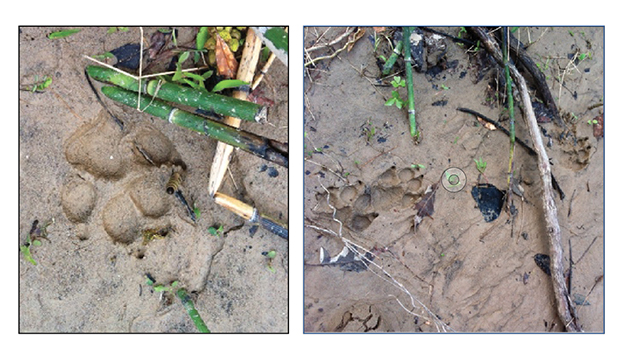 Del Loy said he took these pictures of what he believes to be large cat prints in the sand near his house in Washington not long after he moved there seven years ago. Loy said someone from the Mississippi Department of Wildlife Fisheries and Parks told him they appeared to be cat prints at the time.(submitted)

WASHINGTON — Del Loy has lived on his property bordering the Natchez Trace for seven years, but on Saturday Loy said he saw something he has never seen on his property before — a black cougar.

“Saturday afternoon I went into my backyard, which borders the Natchez Trace in Washington, to walk the dog, and as is my custom I cast a glance toward a ridge near the tree line,” Loy wrote in a social media post on Wednesday. “Usually there are deer on the ridge, which is about 75 yards from my back porch. While I was looking a huge black animal, which I can only describe as a cat, ran the length of the ridge and into the trees on the Trace. I rushed the dog back inside and returned to the porch to watch the area in case it lingered. Never saw it again.”

Loy said he realizes how unusual his story is since experts say the existence of black cougars, or black panthers, have never been confirmed.

“I understand that black panthers don’t exist, and there has never been one documented,” Loy said. “They have black jaguars in Central and South America but no black panthers. What I saw was cat-like and it was black as night. There wasn’t anything on it but black.”

Despite that, Loy said he decided to share his experience on social media.

“I never, ever make up a story,” Loy said. “I sat on this for a few days, thinking, Do I even want to tell people this? And I decided, you know, I think I’m pretty sure what I saw was a big cat.”

Also, on Tuesday, a commenter on a social media platform stated she had seen a “black panther” go behind a house on Linwood Court.

“I was just headed home on Briarwood,” the commenter wrote Tuesday, “and saw a panther go behind a house on Linwood. Be aware!”

That commenter did not return messages seeking comment for this story. Loy said he had heard about the other post and said he thought it could have been the same cat he saw despite the distance from his house.

Loy said he also has considered the possibility that what he saw could have been something other than a large cat.

“The only other thing I thought it could have been was like a large black Lab but the head was small,” Loy said. “I couldn’t really see features on the head, and it did not run like a dog. My immediate reaction was, ‘That is a cat.’ It was much bigger than any kind of a house cat. It was big.”

Loy said when he first moved to the property some seven years ago he saw some prints in the sand that appeared to be large cat prints and he even shared them with an official at the Mississippi Department of Wildlife Fisheries and Parks.

“It was a woman,” Loy said, “and she sent back a message saying, ‘Well, they look like cat prints’ to her. She didn’t see them physically. She just saw my pictures.”

Loy said he had not seen anything since he took those picture that he believed to be a large cat until Saturday.

After Loy saw the cat on Saturday, he said he stayed away from the woods for several days but on Wednesday finally went to examine the area of the sighting.

“(Wednesday) was the first day I ventured out there,” Loy said. “I took my pistol, and I of course wouldn’t shoot a cat unless it threatened me. I went up there and I looked at the ground. It has been real dry and the ground is hard and I could not see any print of anything, even deer prints, which normally there are a lot of deer prints, but the ground is real hard. It is mostly grass up there and the few bare spots that I found I could see nothing scratching the surface, but it has been several days.”

Loy said he deer hunts on his property and his deer cameras have captured raccoons, bobcats and coyotes but never a cougar.

Loy said he has purchased more cameras and plans to install them to try and capture whatever it was he saw on Saturday.