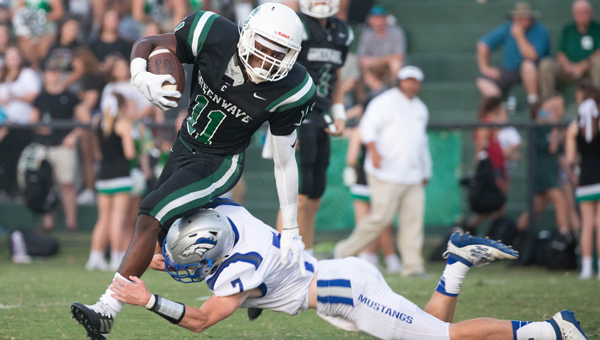 In the first quarter, the Green Wave held the Mustangs to two drives of offense. Their defense gave up less than 10 yards in the first quarter. Both teams would not score in the opening quarter. Head Coach Chuck Darbonne said his defense forced River Oaks into some tough situations.

“We came up big at the right time defensively,” Darbonne said. “Everything started rolling and the defense began to play with a little more confidence than what they had early. It was great to see those smiles on their faces and the confidence they had as the game rolled on.”

“We should have given him the ball a couple more times,” Hannah said. “He did a good job hitting the hole. We’ve just got to find a way to get him some help.”

After the Mustangs fumbled, the Green Wave would have four first downs in their first drive of the second quarter. Running back JC Harris would run for 34-yards for the Green Wave’s second touchdown. Harris would score another touchdown in the quarter.

“I’m very excited I got to play,” Harris said. “I have to give some credit to my linemen, because without my linemen I can’t get any of those yards.”

Later in the second quarter with 21.7 seconds remaining in the half, the Mustangs fumbled the ball near the 5-yard line. Linebacker Bryson Moore picked up the ball and ran for five yards. Also during the first half, defensive back Ben White and linebacker Landon Lees both picked up key interceptions for the Green Wave. The defense would have four interceptions in the game.

“It’s great to have JC back and healthy,” Darbonne said. “We knew he was a great player from the first time he walked onto the practice field. We were ready to roll with him in the second district game.”

Cathedral (3-1, 2-0) will be on the road when they face another District 4 opponent in Brookhaven Academy Cougars.