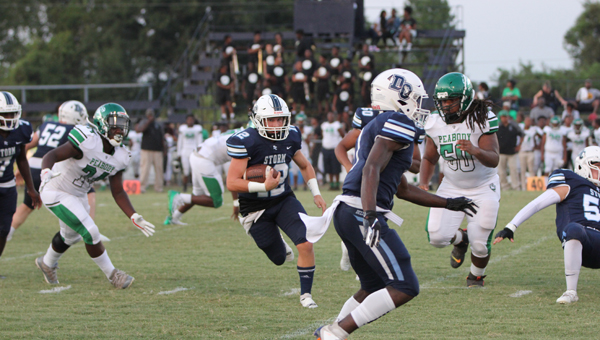 Both Delta Charter, Jonesboro-Hodge are winless

Ferriday – Delta Charter Storm and Jonesboro-Hodge High School Tigers are both winless going into Friday’s game. The Storm will travel to the Tigers.

Storm Head Coach Blake Wheeler said he wants his players to focus this week on two aspects that lacked in last week’s game: blocking and tackling.

“We’re just going to make it a little more physical this week,” Wheeler said. “We’re going to ramp up the intensity in practice,” Wheeler said. “Our level of physicality is going to be up this week. We need to make sure we’re hitting hard and going through snap to whistle.”

In the upcoming game against the Tigers, two players stand out for the Storm: Carson Cupit and Tre Griffin.

Cupit had 12 tackles in the game while Griffin ran for 190 yards and scored two touchdowns. Wheeler said both of those players played well against Peabody.

At practices this week, Cupit said he is trying to go full speed and to encourage his team.

“The energy has been lacking,” Cupit said. “Me and a few of the other guys are the only ones who have heart and the drive to want to play. I have noticed that there has been a lot of guys who haven’t been giving it their all. I try to fire up everyone at practice and during the game.”

The last time the Storm (0-3) and Tigers (0-3) faced each other was last year in the first round of the Class 2A bracket. The Tigers beat the Storm, 52-6. Wheeler said the Tigers are a tough team.

“They have a great program, and it’s going to be a stiff challenge for us,” Wheeler said. “We’re going to try and execute better than the game before. It’s going to be a matter on whoever executes better. That’s what we’re striving toward for ourselves.”

The kickoff is set to start at 7 p.m. at Jonesboro-Hodge High School in Jonesboro, Louisiana.