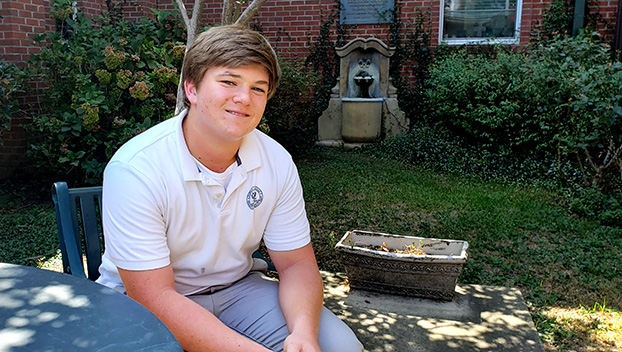 Tyler Gregg, 10th-grader at Cathedral High School, is playing with his band “Easily Distracted” this November at the Longwood Afternoon music festival. He is the son of Robyn and Justin Gregg. (Sabrina Robertson / The Natchez Democrat)

NATCHEZ — Tyler Gregg, a 15-year-old sophomore at Cathedral High School, may have a bright future in the music industry and has already seen the spotlight on a big stage more than once.

“We had a talent show here at Cathedral,” he said. “At that time I was alright at guitar and Bryce sang in the talent show, so I wanted to get together with him and start playing around the area.”

Gregg said he remembers being nervous during his first stage performance at the talent show.

“As I started playing, it got easier,” Gregg said.

Gregg said he started taking piano lessons in second-grade and by third-grade had picked up guitar, too. He also learned to play the drums and bass.

Since the talent show, Gregg said his music interest skyrocketed.

Gregg said he and McGlothin started studying at the School of Rock music school in Baton Rouge where they travel once a week and have also played in groups in front of hundreds of people in Baton Rouge, Lafayette and New Orleans.

Gregg said he and McGlothin have played at the Longwood Afternoon music festival two years in a row and will be among the headlining bands at the festival again this fall along with their newest band member, Natalie Ainsworth.

Gregg said in addition to music, his hobbies include playing sports and fixing old trucks with his father.

He is a member of the Cathedral High School football and baseball teams and is the son of Justin and Robyn Gregg.

When he finishes high school, Gregg said he sees himself pursuing a career in music, farming or mechanical engineering.