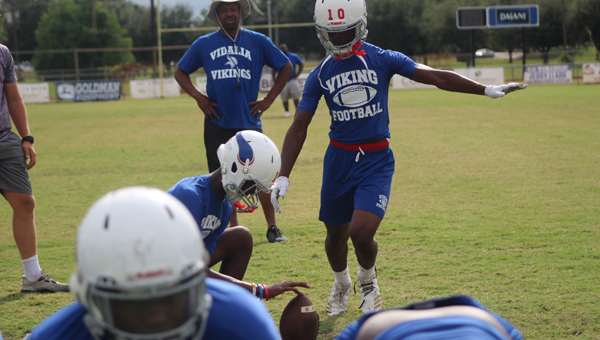 Sema’j Hayes holds for Calvin Johnson who attempts to kick the ball through the uprights during Thursday’s practice. The Vidalia High Vikings are facing 5A West Ouachita Chiefs on Friday night. (Patrick Murphy, The Natchez Democrat)

At practices this week, Faircloth said working to get the team to focus on stopping the Chiefs running game and blitzing. In those practices, running back Devin Green said he has been going hard at each play.

While Green has been focusing on not wasting a repetition, defensive back CJ Chatman said he has been studying film.

“I have studied the players I will be facing against,” Chatman said. “I have also gone hard during every play at practice.”

In comparison between the two schools, the Chiefs are three times the size of the Vikings. Faircloth said this is the first time in years the Vikings will face a 5A school.

“This game is great for power points because it’s going to help us in regards to the playoffs,” Faircloth said. “We have been watching them on film and it looks like they have 100 kids and 50 coaches on the sidelines. They have a coach for every position. It’s an advantage they have over us. We have five coaches altogether.”

One of the players to watch for the Chiefs is running back Tobias Owens. In last Friday’s 28-6 win over Jonesboro-Hodge High School, Owens recorded 22 carries and rushed for 155 yards.

“West Ouachita is a great running team,” Faircloth said about Owens. “They have a heck of a running back. We’re going to focus on stopping him.”

Faircloth’s uncle was head coach of the Vikings for 44 total seasons.

“It’s definitely going to be an unique experience,” Faircloth said. “I’m going to be nervous for sure. It’s going to be a little surreal and I look forward to it.”

The game is set to begin at 7 p.m. on Friday at Vidalia High School.

Here are tonight’s games that all begin at 7:

NATCHEZ — The Cathedral High School Lady Green Wave will be the No. 4 seed out of District 4-4A for... read more