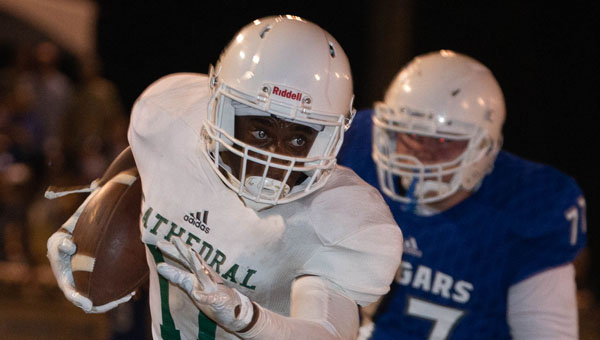 Cathedral senior JC Harris drives through the middle for a first down Friday night against Brookhaven Academy. (Courtesy Bill Barksdale)

BROOKHAVEN — On homecoming night, the Brookhaven Academy Cougars scored a touchdown in the final minute to escape with a 34-33 win over the Cathedral High School Green Wave in a thrilling MAIS District 4-4A game.

It was indeed a heartbreaking loss for Cathedral, which was playing its third straight district game while Brookhaven Academy was playing its district opener. A win for the Green Wave would have kept them undefeated in district play heading into their showdown at Riverfield Academy.

“Both teams played hard. They made one more play than we did at the end,” head coach Chuck Darbonne said. “It was a well-played game.”

Instead, the Green Wave will have to defeat Riverfield Friday at 7 p.m. and have some help along the way to win the district championship. Cathedral took a 33-28 lead with 1:19 to go in the fourth quarter before Brookhaven Academy (4-1, 1-0) scored a touchdown with less than a minute to go to snatch victory from the jaws of defeat.

The Green Wave led the Cougars 13-7 after one quarter of play, but Darbonne said his team could have had a bigger lead.

“We had our chances throughout the game to widen the lead, but we didn’t take advantage of them,” Darbonne said.

Instead, the Cougars scored the next 14 points to grab a 21-13 lead by the end of the third quarter. But the Green Wave responded with two touchdowns of their own for a 27-21 lead with 7:05 remaining.

J.C. Harris was among the standout players on offense for Cathedral with over 200 yards rushing.

The loss dropped Cathedral to 3-2 overall and 2-1 in district play.