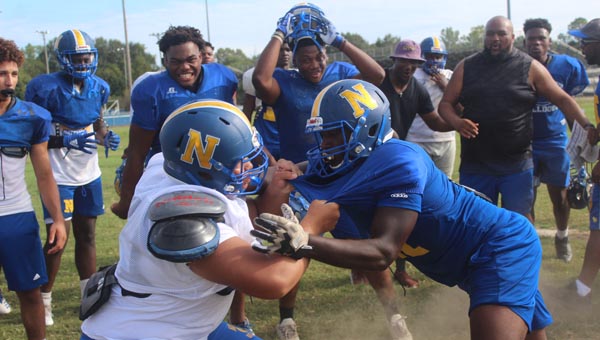 Michael Williams and Corey Harris participate in dog fights before practice on Monday at Natchez High School. The Bulldogs come off of a bye week and will face Jim Hill High School on Friday. (Patrick Murphy, The Natchez Democrat)

Jim Hill will be 1st region foe for Natchez

NATCHEZ — It has been more than a week since the Natchez High School Bulldogs have taken the field since last Friday was a bye week.

This Friday night, the Bulldogs face their first Region 3 opponent of the season when they host the Jim Hill High School Tigers of Jackson.

For five weeks, the Bulldogs have faced opponents outside of the Bulldogs’ Region 3 Class 5A.  Bulldogs head coach Roy Rigsby said he views out of region games as warm-up games for region play.

“These games count towards the playoffs,” Rigsby said. “The bottom line is when you play a district game they count, so you try to win every game you can.”

With last week’s bye week, where the Bulldogs didn’t face anybody on Friday, Rigsby said his team mainly focused on practicing to prepare for the upcoming game against Jim Hill. Rigsby said the bye week gave the Bulldogs an opportunity to heal up and for different players to play other positions.

“You give a kid an opportunity to try another position, and you will never know how well they do at it,” Rigsby said. “We have a couple receivers playing at defensive backs and vice versa. Whenever you have that type of thing going on, it increases your team’s depth.”

During last week’s bye week, Rigsby said the Bulldogs continued to practice. Defensive back Antonio Robinson said the bye week helped him focus on his mental toughness and technique.

“I can say we have gotten stronger and way more capable at doing what we’re doing,” Robinson said. “The previous game was bad, but I know we will bounce back mentally and physically from that loss.”

To prepare for Friday’s game against Jim Hill, Rigsby said he’s keeping his players focused on fundamentals and technique.

Robinson said both his mental toughness and technique lacked in the 53-14 loss to Scotlandville Magnet High School on Sept. 13.

“I got sidetracked and guys got into my head,” Robinson said. “I wasn’t performing like I did at practices.”

In the game against Scotlandville, quarterback James Singleton was 11-for-21 on completions with two passing touchdowns.

“At practices this week, I’m making sure I complete more passes and stay in the pocket longer,” Singleton said. “Instead of taking off and running the ball.”

The game starts at 7 p.m. Friday at Natchez High School.

Prep Football Round Up: ACCS uses big 2nd half to beat Copiah Academy

GALLMAN — The Adams County Christian School Rebels bounced back from its first loss of the season in resounding fashion... read more