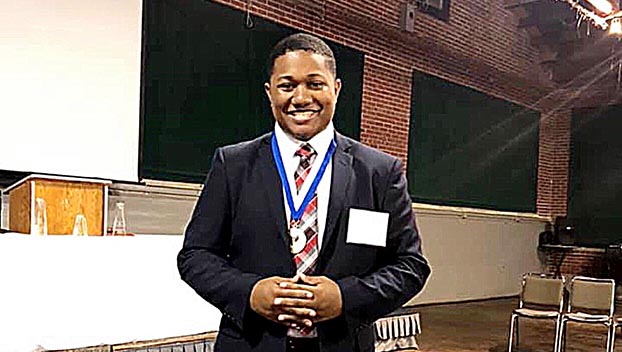 NATCHEZ — Natchez Early College Academy senior, Xavian Lewis said music and people are his life. He uses both passions to further his academic and career goals.

Lewis, the son of Dywon and Tricia Lewis, said ever since he was little he had been placed in the spotlight of the praise team in his father’s church to sing but never experienced stage fright.

“I love people, and without people my energy would be very desolate,” Lewis said. “I thrive off of being in the presence of other people and if you were to put me in an enclosed space I might lose my mind. In a group setting or even in front of a crowd, all of my nervousness leaves me.”

Lewis said he joined the Phi Theta Kappa honor society last spring and now holds two offices with the organization: the vice president of leadership for the Copiah Lincoln Community College chapter and as the Miss-Lou regional secretary.

Lewis was inducted as a regional officer for the Phi Theta Kappa at a conference in Natchez Sept. 6 and 7 — which meant he would be the bridge between the various people and age groups involved with the society on both sides of the Mississippi River, he said.

“I’m in charge with keeping track of all the data for the region and conducting a very strenuous roll call using the Greek alphabet,” Lewis said. “Each of the nine chapters has a different sequence of Greek letters in their name.”

At NECA, Lewis helps new members learn which leadership role is the best fit for them and ensures each member is actively involved as community leaders in their daily lives, he said.

Lewis said he is on a track to earn his associate’s degree at Co-Lin this year and plans to complete his bachelor’s degree in marketing at the University of Southern Mississippi before pursuing a master’s degree in business administration.

“I hope to land a job in a marketing firm for experience,” Lewis said. “My goal is to one day start my own marketing firm that is very conducive to music. My passion is music but my field of thought is business, so I want to put those two together to market music companies.”

Schools should be lauded for accomplishments

Congratulations Natchez Adams School District. Seriously!  Congratulations! I had the pleasure of being educated as to the actual achievements of our... read more