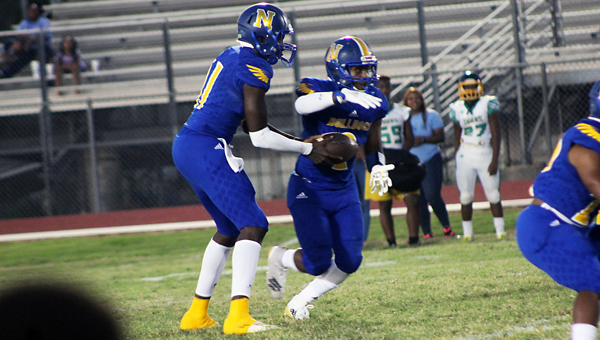 James Singleton hands the ball off to Desnick Bolden in the first quarter of the game. Bolden rushed for two touchdowns in the Bulldog’s 33-32 win over Jim Hill. (Patrick Murphy, The Natchez Democrat)

NATCHEZ — In the first Region 3-5A game of the season, the Natchez High School Bulldogs came back from a 20-14 deficit in the first half to defeat Jim Hill High School Tigers 33-32.

With the Bulldogs trailing by four points with 7:26 remaining in the fourth quarter, quarterback Kyreek Murray led most of the Bulldogs’ final drive with four passes. Murray’s last pass was to Mike Williams for a 20-yard pass, which led to a 1-yard touchdown run by Murray.

“He came into tonight and I was proud of what he did,” Rigsby said about Murray’s performance. “He stood up and never complained. He did what he had to do for the team.”

After Trent Richardson blocked a punt in the third quarter, quarterback James Singleton threw a 21-yard pass to Mike Williams, and the Bulldogs took their first lead of the game, 21-20.

Later in the Tigers’ next drive, LJ Minor intercepted the ball with 8:17 left in the third quarter. The Bulldogs scored on a 13-yard touchdown by Desnick Bolden for his second rushing touchdown of the game. Rigsby said he loved the way Bolden ran Friday night.

“I like his competitiveness that he brought to the table tonight,” Rigsby said. “He’s a valuable part of why we won tonight.”

After watching their lead slip away, J’Marquiez McClendon returned the kickoff for 80 yards.

“That was a halftime adjustment that we made,” Jim Hill head coach Darrell Scott said about the return. “When Quavo Davis got hurt during the first half, that was a switch we had to make. It worked out towards our benefit.”

The Bulldogs (3-2, 1-0) will travel on Oct. 4 to Wingfield High School. This is the Bulldogs second game in Region 3 this season.