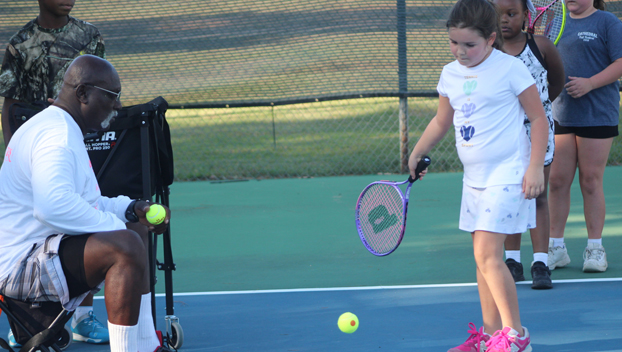 The Dart: Natchez man says teaching tennis is his calling on Earth

NATCHEZ — Henry Harris, 69, said he started to learn how to play tennis at Alcorn State when he was 17 years old.

When The Dart landed near Duncan Park on Wednesday afternoon, Harris was coaching local kids on how to play tennis.

Harris said he never thought he would become a tennis coach.

Harris said he was drawn to playing tennis by seeing Arthur Ashe, a black tennis player, play on TV. Harris said that at the time in the black neighborhoods in the South, tennis was considered a “girlie sport.” So Harris never picked up a tennis racket when he was a child.

“When we saw players like Arthur Ashe on TV, the stigma was still if you played tennis, then you were a sissy,” Harris said. “It wasn’t until I went to college where I found out tennis wasn’t a sissy sport.”

It was back in 1970 when Harris was first introduced to tennis.

Harris said a friend of his, who lived in an adjacent neighborhood to Cathedral, came home from California to pay a visit to Natchez. When they were students at Cathedral, Harris said the friend gave him two tennis rackets.

“I said: ‘Man where did you get those rackets?’ and he said ‘I got those rackets over there at Cathedral. I picked them up and gave them to you,’” Harris said. “I went back over to Cathedral to pay off my debt to Cathedral for helping me make it through tennis. I volunteered as the Cathedral Green Wave football coach and then I became their tennis coach.”

After graduating from Alcorn State in 1976, Harris said he came back to Natchez and become a police officer.

“I would come in my police car and sit,” Harris said. “I watched her teach the kids and she taught me how to coach.”

Harris said he plans to retire effective in October 2020, ending his coaching career that has lasted for 40 years.

“This is what God gave me to do,” Harris said. “I’m glad to know that I have done what God has put me on Earth to do. I know I’m not smart enough to be a teacher in a classroom, but I can teach tennis and life out here on the tennis courts.”

Photo gallery: It was a zoo at annual Fall Festival

Cathedral School celebrated the beginning of its annual Fall Festival Saturday with games on the Midway, a petting zoo and... read more