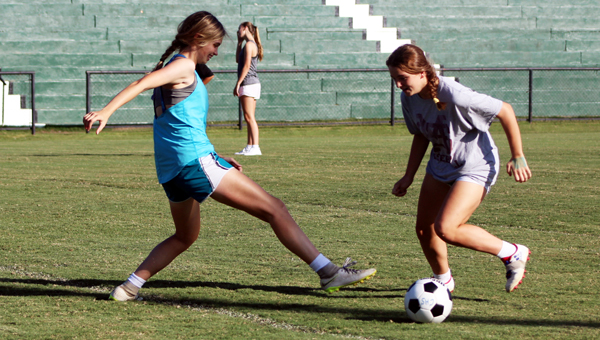 Izzy Dupre attempts to steal the ball away from Gracie Foster during practice on Monday. The lady Green Wave are facing the East Rankin Academy in the first round of the Midsouth Association of Independent Schools girls’ soccer Division II Championship. (Patrick Murphy, The Natchez Democrat)

NATCHEZ — For the past three seasons, the Cathedral Green Wave girls’ soccer team has missed the Midsouth Association of Independent Schools playoffs.

This season, however, the lady Green Wave made it into the playoffs.

The last time the lady Green Wave obtained a playoff spot was in 2016, when the lady Green Wave head coach Dennis Hogue’s daughter played. Cathedral was able to win the South Division II championship outright on Sept. 26 against Brookhaven Academy, 5-2.

Hogue said this season has been amazing and fun.

“I have been so proud of these girls to watch them because I know how hard they work. To see it come to fruition is pretty cool,” Hogue said about the Green Wave’s season. “I just feel like they are getting what they deserve. They earned this opportunity, so I’m just proud as can be for them.”

This is the first time Cathedral is facing East Rankin Academy lady Patriots. The Patriots placed second in the Central MAIS Division. Hogue said it’s going to be a daunting task to defeat the lady Patriots.

Two of the players to watch in this first round game is Izzy Dupre and Rivers Lee. In the last game of the regular season against Brookhaven Academy, Dupre was able to score three goals. Dupre said her goals scored were all because of her teammates.

“I got two passes from one of my best friends on the team,” Dupre said. “The last goal I scored, we had a really good play. That’s good for us to have really good plays and not just lucky shots.”

As a goalkeeper this season, Lee did not allow a goal in eight games. Even though Lee gave up two goals, Lee said one of her personal goals is to keep a clean slate during the playoffs.

“I like my personal goal, but it’s getting kind of nerve racking,” Lee said.

The game will start at 5:30 p.m. today at D’Evereux Stadium at Cathedral High School.

Two hit by car during gas station shooting in Fayette

ArtsNatchez names ‘Artist of the Month’ to be featured in exhibition