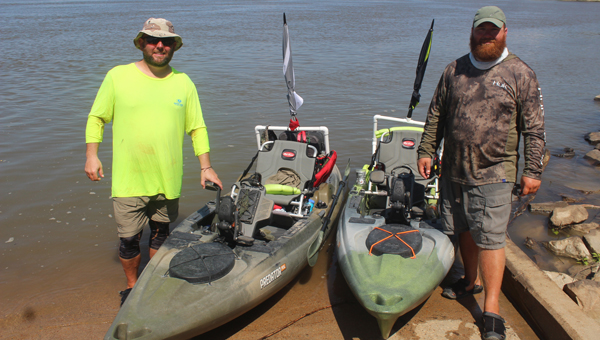 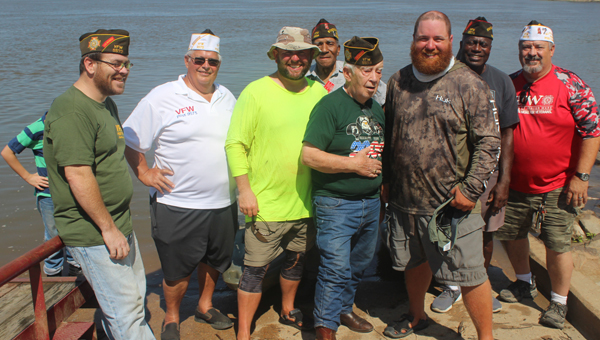 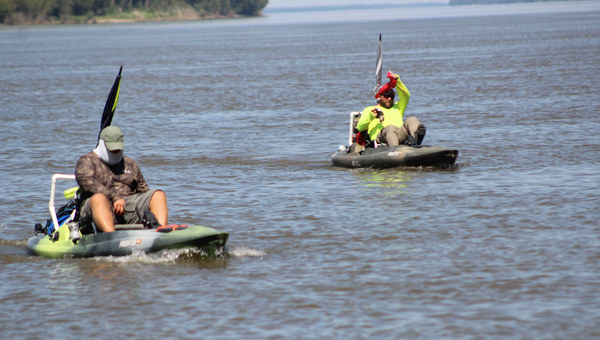 Travis Brown and Greg York paddle in on the Mississippi River to a boat dock on Silver Street on Tuesday afternoon. (Patrick Murphy / The Natchez Democrat) 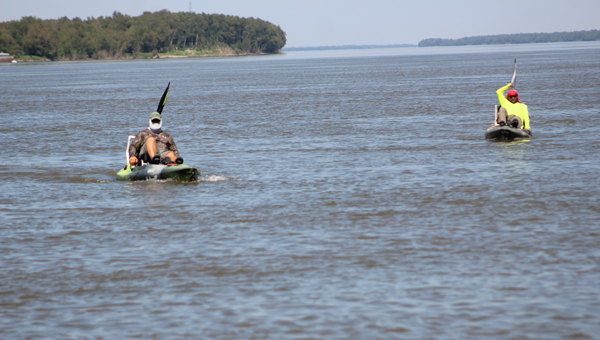 Travis Brown and Greg York paddle in on the Mississippi River to a boat dock on Silver Street on Tuesday afternoon. (Patrick Murphy / The Natchez Democrat)

NATCHEZ — It has been 83 days since two veterans of two different military divisions began their journey kayaking down the Mississippi River on July 10 in north Minnesota. After traveling 2,000 miles they reached Natchez on Tuesday.

The two veterans, Greg York and Travis Brown, are on the trip because they wanted to try it out. The three- to four-month journey is part of the Warrior Expeditions program.

John Floyd, commander of the Natchez Veterans of Foreign Wars Post No. 9573, said the Warrior Expeditions program helps veterans decompress from the military and return to the civilian world. Floyd served 28 and half years in the Army.

“This program means a lot to me,” Floyd said. “That’s our job as combat veterans, those who are able to help those who still need help.”

“A month later, he went out walking and he realized how much better he felt and how much decompression he felt, so he started the Warrior Expedition,” Floyd said. “It brings awareness to PTSD. Soldiers who are living with this problem need to find their strength and their power to continue on. Other veterans need additional help to get to that point. That’s the main thing is trying to help and bring awareness to the combat stress these veterans face.”

In the Warrior Expeditions program, veterans can pick from either kayaking from Minnesota to the Gulf Coast or hiking the 240-mile Appalachian Trail. Approximately 400 veterans will start either of those journeys, while less than 100 will finish them, York said.

Four kayakers began the journey with York and Brown, but two of them did not continue the journey to Natchez.
York, 46, served in the Army for 20 years, retired in 2012 and is from Pueblo, Colorado. York said the expedition is amazing and is a trip of a lifetime.

Brown, 36, served in the Navy for eight years and is from east of Pensacola, Florida. Brown said completing this expedition is going to be an accomplishment.

“To be able to say we’re one of those 100 people to finish, and we did the whole thing in one go,” Brown said. “Nobody will be able to take it away from us.”

Along their 2,000-mile trip, York and Brown said they have met veterans from VFW Posts and other people.

“We had 10-12 scheduled people who came and welcomed us into Natchez,” York said. “It’s the unscheduled supporters that find out what we’re doing and why we’re doing it. Then they go out of their way to cook us dinner, to let us sleep in their house and wash our clothes for us. Those are the people you will never forget along the way.”

After spending the night at a bed and breakfast on Union Street, owned by Ron Frye, York and Brown will travel 200 miles through the Atchafalaya River Basin to the Gulf Coast.