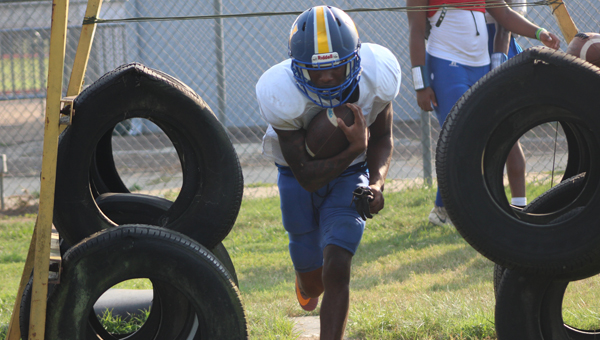 Bulldogs hope to build on momentum against Wingfield

“That’s the key. The team with the most turnovers usually loses,” Rigsby said about ball security. “We want to minimize the turnovers and that’s something we emphasize. It’s one of our main keys we put on the board.”

In the 33-32 win over Region 3 Class 5A foe Jim Hill, the Bulldogs had three fumbles. Two of the fumbles led to touchdowns.

In the game against Jim Hill, Kyreek Murray had four completions. One of the completions to Mike Williams came in the fourth quarter, which set up the game-winning touchdown for the Bulldogs.

“Mike is a playmaker for us,”  Rigsby said about Williams’ playing ability against Jim Hill. “At the same time, we know he’s a freshman. But Mike has a desire to get better every day.”

To limit the number of turnovers in Friday’s game against Wingfield, Kyreek Murray said a machine at practice helps the Bulldogs control the ball. The machine has tires and can be moved in to create limited space for the ball carrier.

“It helps us keep the ball in our hands and not be able to fumble,” Murray said. “That’s going to be the most important thing of this season: ball security.”

The Bulldogs travel to play Wingfield High School at 7 p.m. Friday. The game is the second Region 3 Class 5A game for both the Bulldogs and Falcons.

“It’s all about winning enough district games, being able to play in the playoffs and win the district title,” Rigsby said. “That’s what we’re doing. Some people might look at it as winning streaks or losing streaks. But we’re just focusing on one game at a time.”

The game starts at 7 p.m. Friday in Jackson, Mississippi at Wingfield High School.

Lady Green Wave lose in quarterfinal round against Lady Patriots