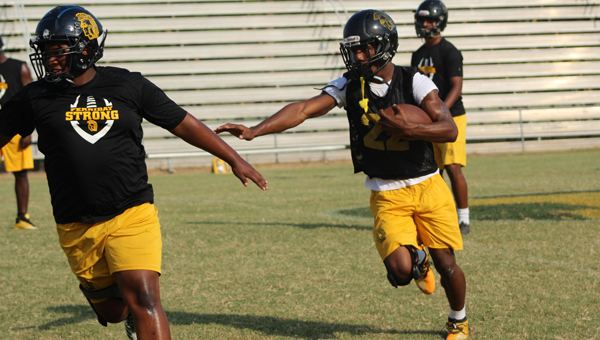 The Trojans plan to take their running game on the road today when they travel to face General Trass High School Panthers.

“Right now, Milligan is setting himself apart from everybody else running the ball,” Ferriday High Trojans Head Coach Stanley Smith said about Milligan. “He’s seeing the lanes good and making good cuts off the blockers. He’s going to be a huge part of our success.”

The rest of the Trojans offense rushed for 78 yards in the game against the Hornets. Smith said Milligan would have to have the same type of running performance he had last week to defeat the Panthers.

“Our running game sets up everything for us,” Smith said. “We have to make sure we stand tall with the physicality. Running the ball is our calling card. That’s what we’re going to do in any game.”

The Trojans defense was key in the victory over the Hornets as well. The defense did not allow any touchdowns. Smith said it was a collective defensive effort in defeating the Hornets.

To prepare for the second LHSAA District 2 opponent in General Trass, the Trojans have worked on being more physical at the point of contact and the blocking schemes, Smith said.

In practices this week, Milligan said the Trojans have made sure to correct their mistakes from the game against Rayville.

“I have been practicing on all of the plays we messed up on during the game last Friday against Rayville,” Milligan said. “We’re making sure we get everything right.”

In the District 2 Class 2A standings, both the Trojans and Panthers are tied at 1-0. Smith said this is an important District 2 game.

The game is set to start at 7 p.m. Friday at General Trass High School.

In this week’s 11 games, the Adams County Christian School Rebels versus Brookhaven Academy Cougars is this week’s Game of... read more