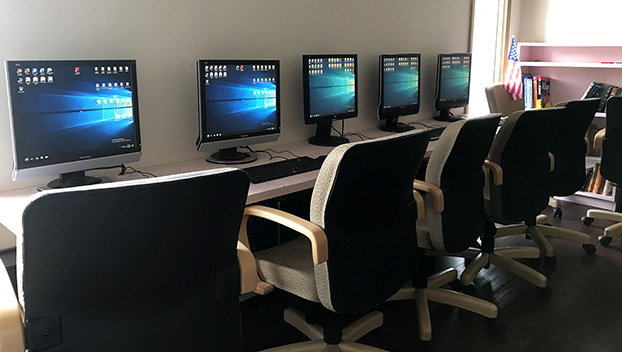 NATCHEZ — Community leaders and members of Zion Chapel AME Church will dedicate a new computer lab at 5:30 p.m. today at the church at Martin Luther King Jr. and Jefferson streets.

“We built this computer lab to be part of an after school youth tutoring center/community resource center,” said Roy F. King III of Custom Computer Detailing, who volunteered to help create the lab and who donated 14 computer monitors and the network switch.

“It’s a beautiful computer lab that’s well thought out and well designed,” King said. “… I’m more than a little proud to say that it was done right.”

The community is invited to the dedication that will include representatives of the Natchez Mayor and Board of Aldermen, local school officials and other VIPs.

“I think everyone attending will be impressed with how well it turned out considering what it actually cost us to build it,” King said.

In addition to the labor and other donations, King also traveled to Texas, Alabama, Louisiana and other parts of Mississippi to acquire items purchased from auctions of former U.S. government property and installing the desktop computers’ software.

“I was very impressed with his willingness to work alongside of me on this project,” King said. “He is a very hands-on type person.”

“I’m pretty sure we collected all of the materials and built everything you see in the computer lab for under $2,500,” King said. “This is easily a $25,000-$30,000 computer lab. So following the ‘Parable of the Talents’ and being thrifty in our spending definitely has had its rewards.”

King said the computer center is an example of what can be done with a little ingenuity and planning to save expenses without sacrificing quality.

Mitchell said he is appreciative of King’s efforts.

“Without (King’s) contributions, in order to get this computer lab we would have been out of a whole lot of money,” Mitchell said. “He has been very helpful.”

Mitchell said the computer system would enhance the church’s tutoring mission and also serve as a community resource center.

“Our church already had a tutorial program, the Zion Academic Program,” Mitchell said. “Many times the students would not come until they were having problems. We are open weekly and the ministry is to help our students.”

Mitchell said retired teacher Patricia West heads up the academic program on Wednesday afternoon to help students with specific problems or to help them acquire GEDs.

The computer lab will be open to the public free of charge, Mitchell said.

“When we open up the computer lab it will also be a resource center for people in the community for if they need access to the computers,” Mitchell said. “We want to target veterans if they are dealing with certain things and trying to advance.”

Mitchell said initially the resource center would be open by appointment only.