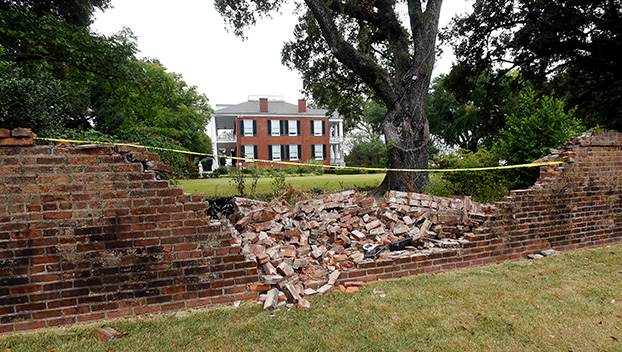 An alleged drunk driver ran into the brick garden wall of the historic house Rosalie early Sunday morning. the wreck took out a portion of the wall. (Ben Hillyer / The Natchez Democrat)

NATCHEZ — A Brandon man is charged with assaulting a police officer and driving under the influence after driving his vehicle into a brick wall along Canal Street.

Armstrong said when Adams was being booked at the Natchez Police Department, Adams assaulted one of the officers in the booking office. Armstrong said Adams was then charged with simple assault on a police officer, a felony.

Tuesday morning Rosalie Manager Nancy McCall said she was working with construction crews and the insurance company to repair the wall. The wreck took out an approximately 15-foot portion of the wall. McCall said the collision created an additional 8-foot horizontal crack in the wall and damaged one of the garden’s iron benches.

McCall said crews would soon begin looking at what brick is salvageable from the wreck and then start rebuilding the wall.

Rosalie is owned by the Daughters of the American Revolution.