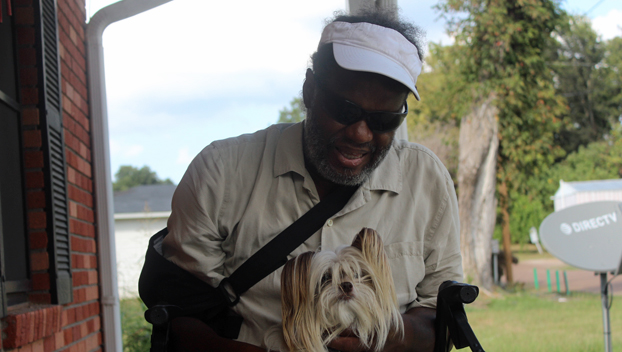 Paul Williams Sr. sits with his dog Cinnamon outside his apartment on Wednesday afternoon. Williams said he has travelled to seven out of 50 states and has even been to Rome, Italy. (Patrick Murphy, The Natchez Democrat)

The Dart: Natchez Man has travelled a lot but Natchez is home

NATCHEZ — Paul Williams Sr., 59, has travelled throughout the United States.

“Yep! I have been everywhere. I have even been to Rome, Italy,” Williams said.

When The Dart landed Wednesday afternoon near Williams’ apartment on Shaw Street, Williams was relaxing outside with his dog Cinnamon by his side.

Williams said he has travelled, either on his black motorcycle or in a car, to seven of the 50 states.

When he graduated from Co-Lin, Williams said he came back to Natchez to be with his parents, Jacilina and Jesse James.

Before Williams said he ever thought about moving out of Natchez, Jacilina died of a heart attack when she was in her 70s.

When Jacilina passed away, Williams said he remembered his father saying: “I need you back home.”

After Jesse James passed away, Williams said he began traveling the country on his motorcycle. First, he rode to Atlanta, Georgia. Then to Dallas, Texas.

“From Dallas, I travelled to Plano, Texas,” Williams said. “I have been to New York, New Jersey, North Carolina, Chicago and St. Louis.”

Six years ago, after coming back to Natchez for the second time, Williams said he had open-heart surgery.

Now, at 59-years old, Williams has three children of his own: Kantha, Paul Jr. and Patrick.

“Natchez has been great to me,” Williams said. “If you go downtown, you will see all of the trees I have planted. I used to landscape for the city.”

Relay of Voices artist, athlete, and Louisiana native, Victoria Bradford Styrbicki and her husband Tom talked with locals this weekend as... read more