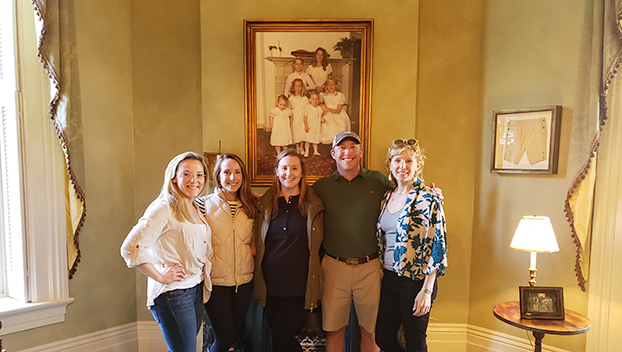 The Dart: Balloon race weekend is time to reunite for one family

NATCHEZ — For some Natchez families, the Natchez Balloon Festival is as good a reason to have a family reunion as Thanksgiving, Christmas or any other holiday.

When The Dart landed near Glen Auburn on South Commerce Street Friday afternoon, most of the Tillman family were visiting from Natchez, New Orleans, Memphis and Mobile to socialize with balloon pilots and each other as part of an annual family tradition.

Randy and Ann Tillman rented a bounce house for their grandchildren and had food and refreshments for all of their visitors and the rest of their family.

“Five of my six children are here,” Ann Tillman said. “This is something we do every year that brings us all together.”

He showed off a large family photo of himself and his sisters dressed in matching outfits, adding there were several similar photos throughout the house.

“This is the greatest group of sisters, and we have more fun as siblings than just about anyone else,” Clifford said. “Growing up it was like I just wanted somebody to play transformers with and all I had was ‘My Little Ponies’ … but I’m very grateful for it now.”

Four of Clifford’s sisters agreed and said his experiences as a child taught him to be kind to the women in his house as an adult.

“There was that one time you commented in Memphis after I had my bangs cut,” Spiotta said to Clifford. “… You had a good talking to and never said a bad thing about a woman since.”

The Tillman family grew over time, as most families do.

Randy and Ann have 13 grandchildren and one more due Dec. 29 on their oldest grandson Jack’s birthday, Clifford said.

“Everything mom does, she does for the grand kids,” he said. “Whenever there’s a holiday or special event like balloon race, she will go all out — even rent a bouncy house — just for them. Anything to pull us all together.”

Take flight with a balloon crew

NATCHEZ — Approximately 150 people huddled around the Natchez Visitor Center at 6 a.m. Friday — all of them waiting... read more