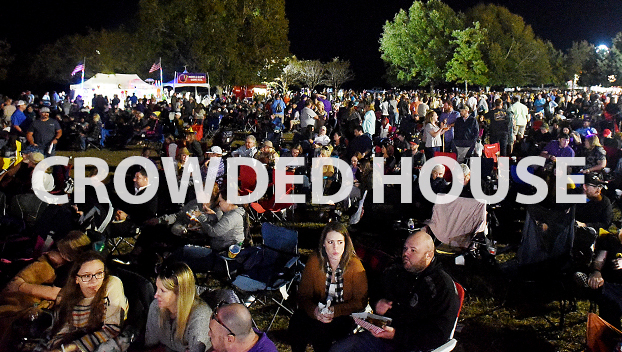 NATCHEZ — For local business owners, sore muscles and tired eyes are good signs on the Monday after Natchez Balloon Festival.

“Everybody survived,” Fat Mama’s Tamales owner David Gammill said about the busy weekend. “Everybody is recovering from a successful weekend.”

Gammill said each year his restaurant starts to prepare two weeks before the festival. For Gammill, the festival begins on Thursday and continues through Sunday.

“Every day gets busier and busier,” Gammill said.

During the busiest times, Gammill said customers waited in lines from time to time, but received prompt service.

Inside the festival site, vendors said they were also pleased with business inside the gates.

Jarita Frazier King, owner of the Natchez Heritage School of Cooking, served jambalaya, shrimp and grits to festival goers. King said she normally works with her mother, who has been a longtime vendor at the festival. This year, King said her mom was not at the festival.

“It went well,” King said about the weekend. “I think the music lineup, including Bishop Gunn, brought the crowds.”

King said she plans to be back next year and may have some additional competition if her mom decides to bring back some of her Cajun specialties to the festival.

Local restaurateur John Parks said he was also pleased with the event.

“There were definitely larger crowds than last year,” Parks said.

Parks, who owns local restaurants Magnolia Bar & Grill, Pearl Street Pasta and 100 Main Street, was also one of the vendors at the festival.

“Overall I was happy with the weekend,” Parks said.

Like restaurants, local shops were also busy through the weekend.

Darby Short, the owner of Darby’s and Darby’s Furniture, said she didn’t see any hot-air balloons until Sunday because of the busy weekend.

“It was a very good weekend — a much-needed shot in the arm,” Short said. “Saturday was very, very busy and Sunday was pretty busy.”

The steady stream of customers kept Short and other employees busy, preventing them from getting to the festival.

“But that’s OK. I am not complaining,” Short said. “It was a beautiful weekend.”

Short said the successful weekend allows organizers and the community to prepare for the next festival.

“This weekend, we should really gear up for next year because when we have a beautiful weekend this year, it makes next year’s festival even bigger and better.”

“We saw many customers from way up in North Mississippi and from the coast and New Orleans,” Wood said.

Wood said his store opened at 7 a.m. each day from Thursday through Sunday to accommodate his customers.

“Some started on their Christmas shopping,” Wood said.

Overall, Wood said the weekend was a good one.

“It is a positive that I think Natchez can duplicate,” Wood said.

Weekend attendance may be record crowd

NATCHEZ — Natchez Balloon Festival officials say this year’s attendance may have been the largest ever. “There is no... read more