Weekend attendance may be record crowd 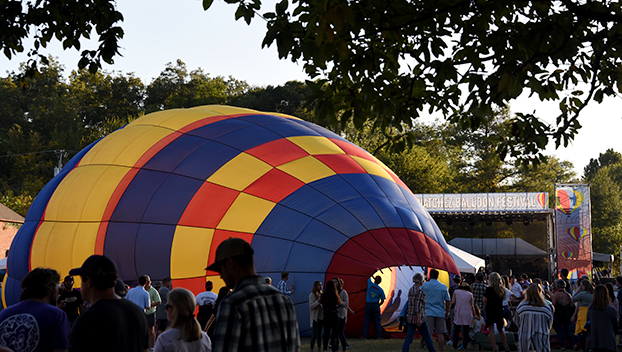 NATCHEZ — Natchez Balloon Festival officials say this year’s attendance may have been the largest ever.

“There is no question it was a good turnout,” Balloon Festival Site Director Scott Adams said Monday morning.

Adams said final numbers will not be tallied for several days but indications are the crowds were bigger than in recent years for the three-day weekend.

“I would certainly say they are up across the board,” Adams said.

Festival director Babs Price said she and other organizers were very happy with the turnout.

“We don’t have a count yet, but by eyeballing the crowds, I would say this year was one of the highest attendances we have ever had,” Price said.

This year the festival made several changes, including hiring Arden Barnett of Ardenland as its new music promoter.

“We are very fortunate Arden agreed to help us this year,” Price said.

Barnett said the weekend was blessed with good weather and good attendance.

“From a festival standpoint, we couldn’t have bought better weather,” Barnett said. “From our perspective it was a wonderful weekend. The City of Natchez did a wonderful job.”

With his first year at the festival complete, Barnett said planning for the next year’s festival is already in the works.

“We already have discussed a few changes for next year,” Barnett said. “We will use this experience to tweak some things.”

Price said organizers received a lot of positive responses from the weekend, including how the festival site was reorganized, a new ticketing system and changes in festival hours.

“We had a very good weekend, the balloons were beautiful and the music was great,” Price said. “I think everybody was excited to have Bishop Gunn, too.”

Emergency sirens down in county