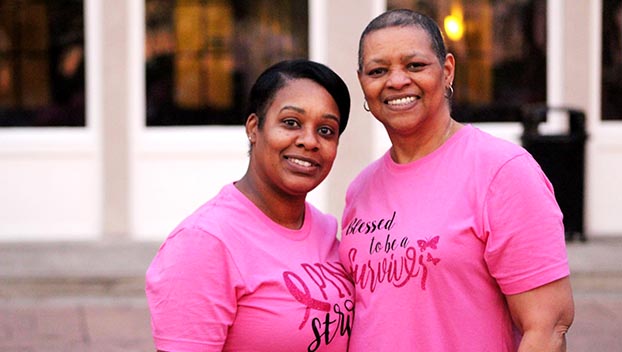 Darlene Williams said her breast cancer experience has taught her to be grateful. Even when she had cancer, she noticed other people coming in and out of treatment centers who were going through experiences a lot worse than hers. Williams, above right, stands with a family member Candice Davis. (Patrick Murphy / The Natchez Democrat)

Giving thanks: Survivor said breast cancer experience taught her to be grateful

On Christmas in 2018, 62-year-old Darlene Williams said she discovered a lump in her breast that was about the size of a quarter. Though she didn’t know it at the time, the next year of her life had changed, she said.

“I was visiting my daughter and granddaughter in Texas when I felt a lump,” she said. “I thought that maybe I pulled something, like a muscle. When I came home in January, I thought I’d get it checked out so I went to the doctor.”

Over multiple appointments, Williams said she had a mammogram, an ultrasound and eventually had a biopsy that led to her diagnosis. In February, Geoffrey Flattmann, M.D., informed her that she had stage-three breast cancer.

“It was about 5 p.m. when my results came back,” Williams said. “From there, we just jumped right into the treatments. There were many times I’d just put my head down and asked the Lord to give me strength. … I was numb, scared but knew this was something I had to go through. I knew that if I cry, it was not going to go away.”

Williams said she had a lumpectomy, six rounds of chemotherapy and eventually a mastectomy.

“I’ve known a couple of people, including my aunt who had breast cancer and my mom who had lung cancer and several friends and acquaintances — I just never thought it would be me,” she said. “The lump just kind of appeared one day.”

Williams said she was very grateful to friends and family who supported her through the process and also to the staff at Merit Health Natchez who treated her, including Flattman, Jack Rodriquez, M.D.; Scott Wolfe, M.D. and Frank Guedon, M.D.

By Sept. 13, her scans were all clear, Williams said.

“The most difficult part was not knowing what to expect,” she said. “You see people who just bounce right back, but it didn’t happen like that for me. … It helps to have people to love you through it. My family is the best and everyone stepped in — my husband, my children, my nieces and nephews.”

Williams said the experience has taught her to be grateful. Even when she had cancer, she noticed other people coming in and out of treatment centers who were going through experiences a lot worse than hers, Williams said.

“You just have to rely on your prayers and be grateful for what you have,” she said. “There’s always someone who is going through something harder than what you’re going through. I saw several people who were going through more difficult times, even some who lost their fight. … I pulled strength from others going through it. Seeing them fight pulled me through it.”