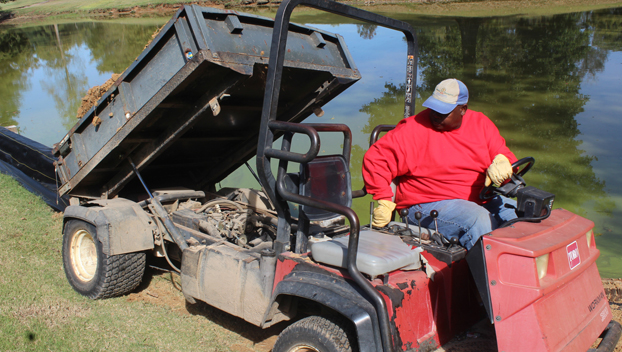 orest Williams moves dirt to a pile near a pond on Thursday afternoon at Duncan Park Golf Course. Williams has worked at Duncan Park for 10 years. (Patrick Murphy, The Natchez Democrat)

NATCHEZ — For the past 10 years Forest Williams has been working at Duncan Park Golf Course.

When The Dart landed on Duncan Park on Thursday afternoon, Williams, 50, was working with two other full-time employees helping build a mud wall around a pond on the golf course.

At 17, Williams said he played two years of summer league baseball for the Ponderosa All-Stars, a youth team in Sibley.

Williams said he enjoys his work at Duncan Park.

“It’s a job, and I’m doing things that I have not done before,” Williams said. “It’s a challenge every day.”

When Williams first began working at Duncan Park in 2009, Williams said it was just a job.

“The jobs are very scarce here in Natchez,” Williams said. “When you get one you got to hold on to it till something comes better.”

At Duncan Park, Williams said he and two other full-time workers have helped make Duncan Park the “best-looking” golf course around.

“All of the golfers come here and tell us we’re doing a good job,” Williams said. “The golfers tell us they have never seen a golf course like ours.”

If Duncan Park competed with other golf courses in Miss-Lou, Williams said he believes Duncan Park would win in the category of “best-looking.”

Images from Saturday morning’s dedication of the Proud to Take a Stand Monument dedicated to the hundreds of people who... read more