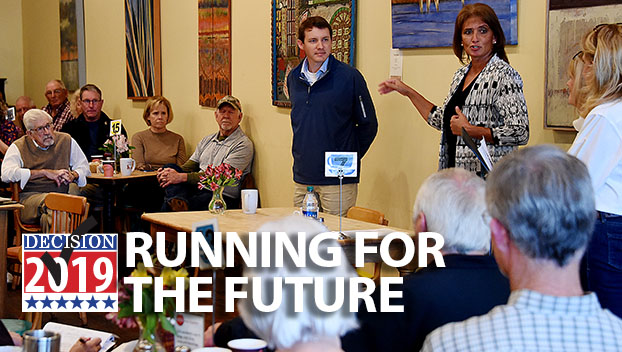 NATCHEZ — The two candidates for Mississippi Senate District 37 agree on one thing. Both said they are committed to creating a vibrant future for Southwest Mississippi but offered varying views of how to get there.

Democrat Will Godfrey and Republican Melanie Sojourner are vying for the seat vacated by Sen. Bob Dearing, who retired at the end of his 36th year in office.

Both from Natchez, Godfrey and Sojourner answered a variety of questions in front of an audience that included family members of both candidates.

More than 60 people filled the Natchez Coffee Company dining room Friday morning to hear from the candidates as part of the weekly Friday Forum sponsored by the Natchez-Adams County Chamber of Commerce and Alcorn State University.

“The idea of leaving our children and grandchildren a better future is what it is all about,” Sojourner said.

To get there, Sojourner said government needs to get out of the way.

“I am a true conservative Republican. I have never been ashamed of that,” Sojourner said.  “I believe government should remain small and should be limited in scope.”

Sojourner said she wants residents in Southwest Mississippi to be able to raise families and businesses the way they see fit.

“I want to keep your taxes low and you to keep more of your hard-earned money,” Sojourner said.

Eight years ago, Sojourner beat incumbent Bob Dearing for the District 37 seat but was defeated four years later by Dearing, who recaptured the seat for his last term.

In her term, Sojourner said she is proud of what she accomplished, despite some of the campaign rhetoric that has been used in the election, claiming she was an absent legislator and did not author any legislation.

“I authored legislation on 50 occasions that were signed into law,” Sojourner said. “I cast over 3,000 votes in the four years I was there. I missed 52 votes.”

Godfrey said he believes a brighter future for Southwest Mississippi and the state will not be accomplished if things remain the same in Jackson.

“I am running for one reason. I think what we are doing is not working in Jackson,” Godfrey said. “For a long time, the Legislature has been ignoring the basics, what I call our infrastructure, our schools, our hospitals. They are our foundation, and we have been allowing those things to crumble.”

Godfrey said the Legislature’s inability to make the right investments has created what he called “the biggest brain drain in the country.”

Godfrey said he believes the Legislature spends too much time focused on divisive political issues instead of working together and using common sense.

“I think we need to do things differently in Jackson,” Godfrey said.

During the forum, the candidates were able to address a variety of issues, including Medicaid expansion, education, and the state flag.

Sojourner said she is against Medicaid expansion, suggesting that other free-market practices other states are doing exist that can help make healthcare stronger in the state.

“Hospitals were thriving before government tried to fix healthcare,” Sojourner said. “Double downing on government is not the solution.”

Godfrey said he is for Medicaid expansion because legislators have yet to offer any other solution to the current crisis.

Godfrey pointed to a recent report that identified rural hospitals in Mississippi that are at high financial risk.

“Three of the six critically essential at-risk hospitals are in Southwest Mississippi,” Godfrey said. “We have buried our head in the sand on Medicaid expansion. Right now, I do not see another solution that is on the table. Our hospitals are struggling to stay open, and right now, we are standing aside and watching them struggle.”

Sojourner said she supports adding career and technical training programs in schools, to provide training for skills that are needed for good-paying jobs — jobs that do not necessarily require a college degree.

“Right now, there are pockets in the state that are doing that. We need to do that right here,” Sojourner said.

But Godfrey said improving the current state of our schools is not enough.

“We don’t just need to improve our schools; we need to transform our schools,” Godfrey said.

Sojourner said if you talk to teachers and administrators, funding education is an important issue.

“We have to do a better job at funding education,” Sojourner said. “My big concern is that I want a larger portion of funding spent in the classroom and higher teacher pay and more money for instructional pay for students.”

“That is ridiculous. I voted against (the Superintendent),” Sojourner said, a vote that she said deviated from some of the Republican establishment.

“Our teachers deserve more than we can ever pay them. We have to spend more money in the classroom,” Sojourner said.

“We should be shooting a lot higher than for adequate,” Godfrey said, referring to the Mississippi Adequate Education Program that is currently used to calculate how much should be spent on education each year.

“Our teachers deserve more than we can pay them,” Godfrey said.

Teachers from other states make an average of $6,000 more than teachers in Mississippi, Godfrey said.

Godfrey agreed and added that the state’s infrastructure needs are not just about roads and bridges, but also includes technology and rural Internet service, two issues that are very critical to local business owners.

Sojourner said she is on record “supporting the wishes of the people who voted to keep the current state flag.” In 2001, voters voted down a non-binding referendum to change the flag, which contains the Confederate battle flag.

Godfrey said he thinks the state needs to move on from the issue.

“I think we need a flag that unites everyone,” Godfrey said. “The more we can move forward together, the better.”

Godfrey said if he is elected, he will focus on the needs of the community.

“We all have a personal stake in what kind of community we are going to have going forward,” Godfrey said. “When they don’t do what they need to do in Jackson, it makes it harder on communities —  the burden is shifted to counties and local communities.”

Godfrey said the Legislature needs to stop focusing on political issues and focus on the needs of the community.

“We need to do a much better job for building for our future,” Godfrey said. “They have ignored Southwest Mississippi for far too long.”

Godfrey said she wants to provide for a better future by helping provide a growing economy that doesn’t rely on the government.

“The best way to do that is to get government out of the way. The less bureaucracy you have in your business, the less burden you have in taxes. The more investment you can make in your business, the more people you can employ,” Sojourner said. “The more people you employ, the more money that is spent in our local tax base. That’s what I want to make as the top priority for Southwest Mississippi.”

VIDALIA — At least one person was sent to the hospital in four separate wrecks that occurred Friday on... read more