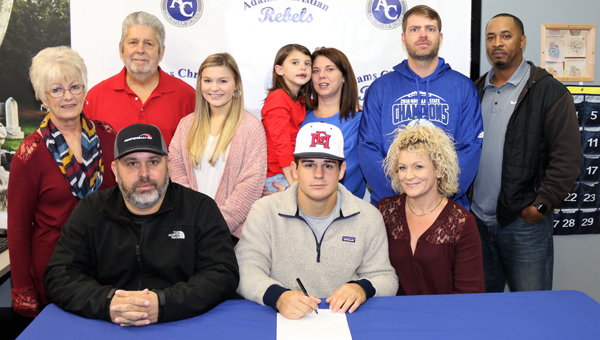 NATCHEZ — Ever since Rhett McDonald played tee ball at the age of 4, playing collegiate baseball has been his dream. On Nov. 2 in Adams County Christian School’s library, the dream came true when McDonald signed to play collegiately at East Mississippi Community College, a two-year community college.

“I’m very excited to continue to be able to play baseball,” Rhett said. “Being a collegiate athlete is what I have prepared for most of my life.”

After completing his education at EMCC, Rhett said his plan is to continue his athletic and academic career at Mississippi State University.

In attendance at the signing in the library were McDonald’s family members and the Rebels baseball Head Coach Matthew Freeman and Rebels football Head Coach and Head Master David King.

Shaun McDonald, Rhett’s father, began coaching Rhett when he was playing tee ball at 4 years old and has coached him ever since, including in travel ball and showcase ball.

At 12 years old, Rhett was named an All-American and travelled to Orlando, Florida, to play with other All-Americans. Shaun said they have been everywhere to watch Rhett play baseball.

“It’s a really great feeling knowing that the amount of time we have spent for him to be able to further his career and continue to do something we have spent so much time doing and travelling,” Shaun said. “It’s really unbelievable.”

In the field, Rhett finished the season with an .800 fielding percentage and six assists.

Rhett said playing baseball means a little bit of everything to him.

“As a child, it was fun, friendships and memories and playing catch and taking batting practice with my dad and developing lifelong friends,” Rhett said. “As I get older, baseball now means learning life lessons, a good work ethic and how to handle failure and success. Baseball has taught me how to prepare for success not only in this game but the game of life.”

NATCHEZ — J.C. Harris and Bryson Moore combined for over 400 rushing yards and six total touchdowns as the sixth-seeded... read more