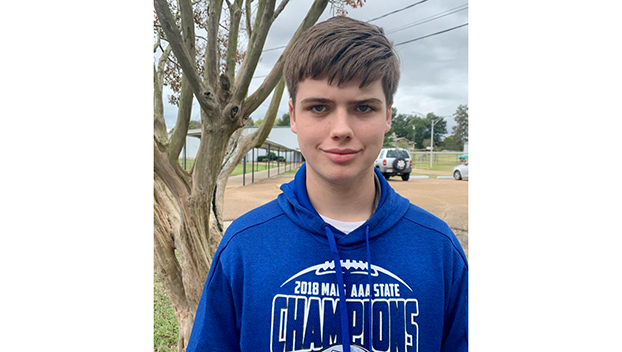 Lane Rehms, a junior at Adams County Christian School, was recently cast as Aladdin in an upcoming production of the ACCS Drama Team on April 25. Rehms is the son of Danna Mooney and Gary Rehms. (Sabrina Robertson / The Natchez Democrat)

NATCHEZ — Adams County Christian School junior Lane Rehms said he considers himself to be pretty well-rounded and recently branched out his interests into “a whole new world” of acting.

Rehms, the son of Danna Mooney and Gary Rehms, was cast in the lead role as Aladdin in the ACCS Drama Team’s upcoming show on April 25.

Rehms said “Aladdin” wouldn’t be his first on-stage experience, however it is his first lead in a play.

“I was in last year’s play, “Frozen,” but I was taken in very last minute,” Rehms said. “The guy who was originally supposed to play the King, Elsa and Anna’s father, wasn’t able to do it. It went surprisingly well for the little time I had to prepare. It was not a problem for me.”

Rehms said his part went so well that he was encouraged to come back and audition this school year. Each student had to pick three roles to act out, and Rehms said he picked Jafar, the Genie and — to everyone’s surprise — Aladdin.

“I knew it was a singing role and I’d have to sing ‘A Whole New World,’” Rehms said. “I think I surprised them with that because I’ve never been a singer. When I got the part, I was excited and a bit surprised. I knew I was going to be in the play but never expected to get the lead. I was honored to be selected for that role.”

Rehms is just as skilled in the classroom too as he maintains a 4.0-grade point average and is considered to be a great student by his teachers’ standards.

Rehms said he is just as natural in leadership roles as he is with acting.

He serves as president of the Student Council and Key Clubs and is also a member of the Youth Leadership Natchez, the National Beta Club and is a lineman on the ACCS varsity football team.

Though undecided on a major, Rehms said he plans to pursue a doctorate degree from whichever university he chooses after high-school graduation.

NATCHEZ — A 15-yard touchdown run by Traylyn Cusic sealed the 22-14 win for the Cathedral Regulators over the Adams... read more