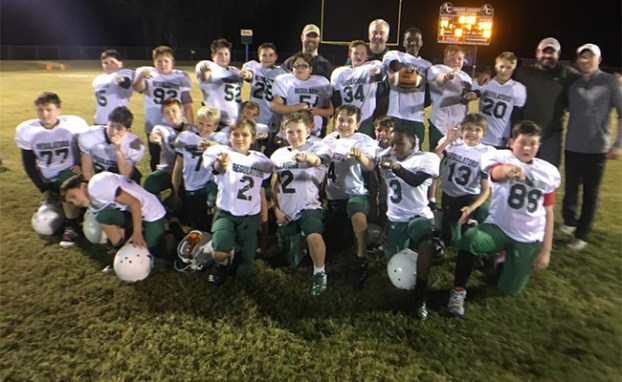 NATCHEZ — A 15-yard touchdown run by Traylyn Cusic sealed the 22-14 win for the Cathedral Regulators over the Adams County Christian School Johnny’s Pizza in the fifth and six-grade American Youth Organization Super Bowl on Monday night.

Both the Regulators and Johnny’s Pizza combined for five rushing touchdowns.

After Braxton Burgess recovered a fumble for the Regulators on ACCS’s first drive in the first quarter, Terrence Lee ran for a 62-yard touchdown. Lee also scored the two-point conversion.

After Johnny’s Pizza scored on a 15-yard touchdown by Colton Rabb, Lee ran for another touchdown. This time for 70-yards, which was the longest touchdown run in the game.

Regulators Head Coach Braxton Fondren said he was proud of Lee’s performance in the game.

“Terrence is an elite athlete and you can see it at a young age,” Fondren said. “He has a great heart and he’s a very talented young man. I love coaching him, watching him grow and turn in a football player throughout the season.”

The longest touchdown run for Johnny’s Pizza in the game was for 36-yards by Rabb. Rabb said he played with 110 percent effort.

“He has always been a leader for us and he plays 100 percent the whole game and he leaves it out on the field,” Freeman said. “You couldn’t have asked for anything more from a young man.”

The Regulators defense also shined in the game. Monday night was the second game Cathedral held an opponent to 14 points. Fondren said it’s unheard of for a youth football team to hold an opposing offense to 14 points.

“The defense is what won us the ball game,” Fondren said. “The last two performances by our defense have been excellent. I couldn’t be more proud.”

In combination, 26 players from the Regulators and Johnny’s Pizza will graduate and play football in middle school, including Lee and Rabb.

“It has been a great experience in playing youth football and has prepared us for middle school and high school football,” Lee said. “It gets tougher every year. I want to thank our coaches for preparing us.”

NATCHEZ — The season started rough for both Natchez High boys and girls basketball teams at the Vicksburg Classic on... read more