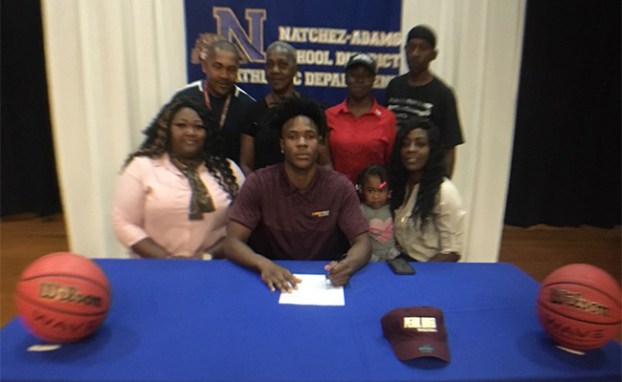 “Pearl River Community College stood out differently from other colleges,” Stampley said. “It’s a blessing because I work hard for it. I thank God because everyone doesn’t get the chance to play sports in college.”

Stampley signed his letter of intent in front of both the Bulldogs boys’ and girls’ basketball teams and football team.

Stampley said he has played basketball his entire life.

“Basketball means a lot to me,” Stampley said. “I put basketball before a lot of things.”

Bulldogs head coach David Haywood said this is the third basketball player he has signed in his four years coaching at Natchez.

“I think Kedarius is a great player and he works hard,” Haywood said about Stampley. “He tries to push his teammates. He’s very positive around the other kids. I think he’s a great addition on our team.”

Stampley is Natchez HIgh’s first senior to sign their letter of intent in the 2019-20 school year.

Stampley said a memorable game playing with the Bulldogs was last season against the Raymond High Rangers. Stampley came back from a broken finger injury and scored 19 points in the Bulldogs’ 64-55 loss to the Rangers.

Haywood said to have one of his players sign to play collegiately is a high school athletes goal.

“I think that’s why they get involved with athletics from the jump,” Haywood said. “It was big for me, so I can only imagine it’s going to be big for every kid who signs to play collegiately, no matter what sport.”

The Bulldogs season began on Nov. 2 with a 77-56 loss to Vicksburg High School in the Vicksburg Classic.

“I think it’s just a great thing to have him sign before the season gets started,” Haywood said. “He can just focus on his game and his teammates, so he can have a successful season.”

The Bulldogs home opener is on Saturday against South Pike High School.  The girls’  game starts at 5 p.m. and the boys’ game at 7 p.m.

NATCHEZ — A 15-yard touchdown run by Traylyn Cusic sealed the 22-14 win for the Cathedral Regulators over the Adams... read more