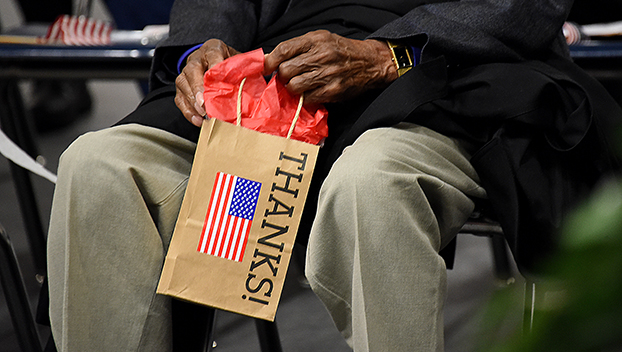 Veterans Day, a day set aside to honor the men and women who have served in the nation’s armed forces, is Monday, and some area veterans say any act of gratitude is a sufficient way to honor veterans on their special day.

“If you know any veterans, just go up to them and thank them,” said Robert Bradford of Natchez, who served in the Army Reserves for 25 years. “If you see a veteran out in the local areas, stores, just go ahead and thank them for their service.”

All veterans share a common bond of personal sacrifice in service to the nation to help defend the freedoms Americans enjoy, Bradford said.

“If you have family members who are veterans, just call them and thank them for all that they have done,” Bradford said. “Just show them love and support, and it does not need to be on a large scale.”

In Natchez, the Seeds of Change Resource Foundation will sponsor a continental breakfast honoring veterans from 9 to 11 a.m. Monday at the VFW located at 370 Sgt. Prentiss Drive, and all veterans are welcome to attend, organizers said.

John Floyd, Veterans of Foreign Wars Post 9573 commander, who served in the Mississippi National Guard for 28 years, said it is important to remember veterans not only on Veterans Day.

“It is always important to keep us in mind, and not forget what we have done,” Floyd said.

Many Miss-Lou veterans need help throughout the year, Floyd said, and many options are available for people to help those veterans.

“It has been going on for a long time, but some of the charter drivers have gotten old,” Floyd said, adding that if the group could get 10 volunteers they could each volunteer one day per month.

G. Mark LaFrancis, president of Home With Heroes, a 501(c)(3) non-profit organization that helps veterans in the Miss-Lou, said veterans are as proud as they have ever been.

“By proud I don’t mean a sense of self-gratifying pride, but a pride in the sense that they served the country and that there are volunteer veterans following them that will serve the country with an equal fervor and patriotism,” LaFrancis said. “Veterans also are significantly concerned that their benefits be sustained. They worry that in tight budget times or in deficits that any administration, regardless of party, may look at what they receive as an option rather than a right.”

That’s where organizations such as the VFW, American Legion and Home With Heroes come in, said LaFrancis, who served in the U.S. Air Force for 23 years.

“(Those organizations) try to keep veterans concerns in the forefront of our national leaders, because to a man and woman, veterans know that without a strong defense force our freedoms could be eroded or even challenged,” LaFrancis said.

In his work with Home With Heroes, LaFrancis said he sees many veterans who need different forms of help.

“Well behind the scenes of our area are many veterans in need,” LaFrancis said. “They may not necessarily be homeless, but they are home challenged in that they may have difficulty maintaining their homes both physically and financially.”

LaFrancis said Home With Heroes depends on donations of money and adult clothing from the community to help meet the needs of veterans.

Many of the area’s veterans are older and have financial difficulties or difficulty obtaining their benefits, LaFrancis said, and Home With Heroes helps them with those issues.

Residents can help by donating to Wreaths Across America, a program that places holiday wreaths on the graves of veterans in national cemeteries, LaFrancis said.

Or, people can stop by to make a donation of money or clothing at Home With Heroes on Thursdays and Fridays from 9 a.m. until noon at the VFW post at 370 Seargent S. Prentiss Drive, Natchez.