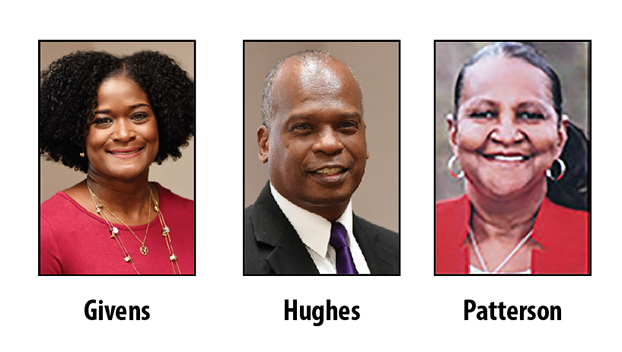 NATCHEZ — In Tuesday’s general election three key Adams County offices turned over for the first time in years because the office holders did not seek reelection: Circuit Clerk, Tax Collector and Tax Assessor.

Two of the newly elected officials, Eva Givens, who won the circuit clerk’s race, and Rose Daniel Patterson, who won the tax collector’s race, have significance experience working in their respective offices.

Newly elected Tax Assessor Larry Hughes will be new to his position.

Regardless of their experience levels, all three of the new office holders said they are busily preparing for smooth transitions when they take office January.

Givens, who has been the chief deputy clerk for several years under outgoing circuit clerk Eddie Walker, said she is ready for a new start.

“I’m going to bring e-filing to the office,” Givens  said of her immediate plans upon taking office.

Givens said she also has been working with the Adams County Board of Supervisors to find a climate-controlled storage facility to store some of the county’s archival records that are currently being stored in a county warehouse.

In addition to the storage facility Givens said she is working with the supervisors to get quotes for converting the archival files to digital.

“We are trying to work with different companies to see about scanning all of our documents from the warehouse,” Givens said. “I think they said that process will take about two years, so we are just working on numbers right now.”

Givens said she has not made up her mind yet about whether she plans to add or reduce any staff members in the circuit clerk’s office.

“I just want to thank all the voters for believing in me and voting for me, and I will not let them down,” Givens said of being elected. “I will show them my experience, my dedication and leadership.”

Hughes said he was excited to be taking on the Tax Assessor’s office and strives to keep the office running smoothly through the transition.

Hughes said he believes Reynolds Atkins ran the office well and he wants to keep the staff in place.

Hughes said he will be traveling to a seminar for tax assessors this week in Starkville to learn more about his position and his role.

Once he returns to Natchez, Hughes said he wants to hold a meeting with the Tax Assessor’s office employees.

“I want to let them know that we are going to work together as a team,” Hughes said. “That’s my next step, because they have been there for a while. I’m not trying to change anything.”

Hughes said he appreciates the trust the voters of Adams County showed in electing him to the office.

“I want to think all of Adams County for their support,” Hughes said. “I ask for their continued support. The main thing is I want to have an open-door policy where people can feel free to come in and talk to anyone and be treated accordingly. Let’s move Adams County to the next level. I feel we’ve got good people working in that office. We have got a very, very good community, and we will all come in and work together as a whole.”

Patterson said she is determined to bring changes to the tax collector’s office that she believes local taxpayers deserve and at one point enjoyed when she worked in the office.

Having talked with numerous people during the campaign, Patterson said the office has recently gained a bad reputation for not answering the phones, ignoring customers in line and other problems.

“I can’t say what is exactly going on, but it is going to be better than it is now,” Patterson. “We have some problems that need to be attended too.”

As for who will be employed and how the office will work, Patterson said she hasn’t decided.

“I sincerely do not know what I am going to do and how it is going to work,”  Patterson said. “My main goal is to have a smooth transition and make it work like it is supposed to.”

Patterson said she intends to have a staff that works together with the goal of  making sure people are handled with dignity and respect when they come to the tax collector’s office.

“After all they are the taxpayers and they should to be treated that way, Patterson said.