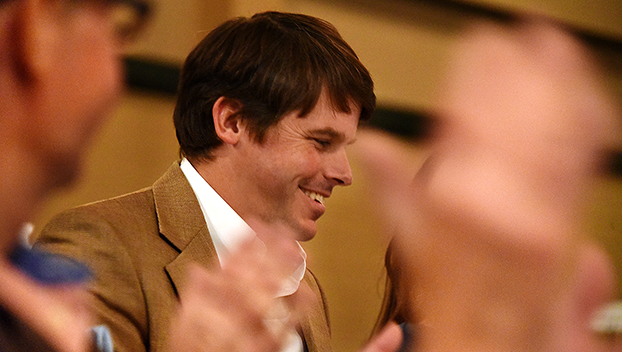 Tate Hobdy receives hearty applause after his Natchezian Man of the Year award was announced at the Natchez-Adams County Chamber of Commerce Gala Tuesday. (Ben Hillyer / The Natchez Democrat)

A Better Place to Live: Hobdy committed to work together for future of community

Chamber of Commerce President Debbie Hudson said when she announced the 2019 Male Natchezian of the Year award recipient Tuesday evening, the news was not a surprise to anyone who knows Tate Hobdy.

“Those of us who know and love Tate already realize that he spends a huge amount of his time giving back to individuals, both young and old, groups and worthy causes,” Hudson said during the 2019 Annual Natchez Adams County Chamber Gala held Tuesday. “When Tate takes on a mission, you can depend on him to be loyal, to contribute positively and to follow up on his responsibilities all while supporting the other members of the group to do the same.”

Hobdy said he also suspected something was up at the chamber gala Tuesday evening when he noticed that his family and entire work staff attended. However, the only person who was surprised about the award recipient was Hobdy himself.

“I was surprised,” Hobdy said. “I thought maybe something was up … but I never expected it to be the Natchezian of the Year Award. I’m very grateful to the chamber, my family and everyone I work with for making this very special experience for me.”

Hobdy said he was raised in Natchez and graduated from Cathedral High School in 2000. He now works as the Vice President of Stephens & Hobdy Insurance, and he purchased the Dairy Queen on John R. Junkin Drive in May.

Additionally, Hobdy has served in many different volunteer positions throughout his career, Hudson said.

Hobdy was the volunteer chairman of the Natchez Adams County Recreation Committee for nine years and played an instrumental role in encouraging state legislators to donate the bean field land that now holds the aquatics center to the City of Natchez, Hudson said.

Hobdy said the opportunity to purchase Dairy Queen presented itself in May, so he stepped down from the recreation board to dedicate his time to both businesses and continue serving in other volunteer positions.

Hobdy served as a board member of the Great Mississippi River Balloon Race, the First Miss-Lou Work Ready Community, the YMCA of Jackson and as a volunteer for Habitat for Humanity and Project Clean Up Natchez. Hobdy is also the upcoming President of the Natchez Rotary Club, Hudson said.

Hobdy also served as a board member and chairman of Natchez Adams County Chamber of Commerce and is a graduate of Leadership Natchez, a member of Young Professionals, founder of the Natchez Leadership Kickball initiative, soccer coach for Cathedral School, and has served as a past chairman of the Cathedral Fall Festival Tennis Tournament, Hudson said.

“I’ve got a great staff over at the Dairy Queen and a great staff at the insurance agency who help me run both,” he said. “A lot of my volunteer positions came and went over time, but my family and I always tried to do everything we could. I love Natchez, I love the people of Natchez and I love to be involved. I know there are a lot of people in Natchez who are also very deserving of the Natchezian of the Year award. … I think everyone takes pride in the town they grew up in and I’m just glad we can all work together to make Natchez a better place to live.”