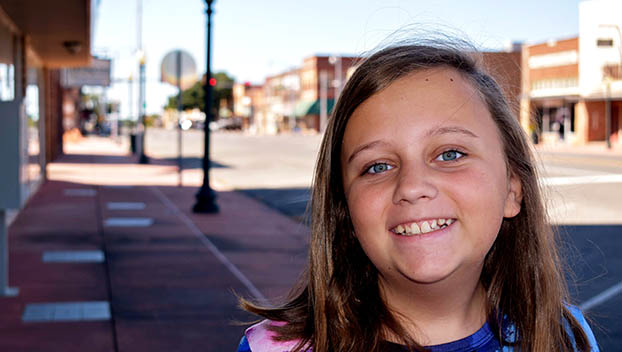 VIDALIA — Vidalia Junior High School’s Student of the Year said she loves leading the way in both the school band and in her community.

Ana Faulk, the daughter of Jennifer and Wesley Faulk, is the first chair for clarinet in the VJHS band though she only learned to play a year ago, she said.

“I watched tutorials on YouTube and my parents ordered me a clarinet when they saw that I was interested in it,” she said. “My sister was already in the band and told me how fun it was. That’s what got me interested in playing.”

Faulk said she is also an active part of the youth leadership team at First Baptist Church in Vidalia where her father preaches and enjoys helping with church fundraisers.

In addition to playing clarinet, Faulk said she loves to read and write stories in her spare time.

“I’ve just loved reading ever since I was little and will read a little before I go to sleep at night,” she said. “Not only is it good for me, but it’s really enjoyable when you get to that one good part in a book.”

Faulk said her mother, who is also a writer, inspired her to write her own stories for fun — mostly fairy tales and other short stories.

When Faulk’s teacher asked the class to submit an essay about why they should be considered for the Student of the Year, Faulk said she welcomed the task.

“I wrote about how I’m involved in my school and in my community and about my grades,” she said.

Faulk said she is on the superintendent’s list this school year for having made straight A’s in all of her classes. She is also a member of her school’s sign language club — where she learns by signing the words to song lyrics and practicing with music.

When she grows up, Faulk said she hopes to become an author and a traveling missionary like her parents and continue serving in other communities around the world.